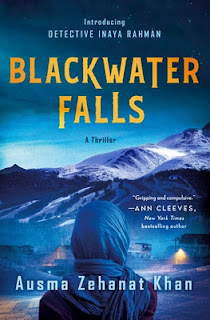 The picturesque town of Blackwater Falls in the Rocky Mountains of Colorado seems an ideal place to live and work. The setting is glorious, with camping and trails for visitors. The leading employers are Apex Dynamics, a tech research firm, and Natural Foods, a meatpacking plant. There is also a large population of Muslim refugees from all over the world, primarily Syria and Somalia, most of whom work at Natural Foods.

Underneath the surface, however, bubbles a stew of hate and corruption. The hate comes from a prominent evangelical church and its accompanying biker gang, the Disciples. The corruption stems from the Sheriff, who has a finger in every pie and absolute control in the town. Inaya Rahman is a local who has returned after a traumatic stint at the Chicago PD. She is part of the new Community Response Unit, led by Lt. Waqas Seif. Her first significant crime is genuinely horrific, the murder of a promising refugee student, Razan Elkader. Razan was nailed to the door of the local Mosque in a sick parody of the Crucifixion. The disappearance of two Muslim teenage girls preceded the murder of Razan, ruled runaways by the Sheriff with little to no investigation. Neither the church nor the Sheriff has escaped scrutiny. The FBI has an operative implanted with the Disciples and the police department.

Blackwater Falls is a complex and timely novel in which just about everyone's motives are suspect at one time or another. Inaya is a well-portrayed character, as are her Hispanic partner and a Black firebrand attorney. Both are female, and the three become close friends and colleagues. I suppose I am as ignorant as the average American about the lives of immigrants. Blackwater Falls gave me a look into those lives, especially a Muslim woman who wants to operate as a professional yet feels the tug of her religious beliefs. Inaya's decision to wear the hijab when the other women in her family do not is just one instance.

The themes of violence and social justice resonate in Blackwater Falls and make for a compelling read. Thanks to NetGalley and Minotaur Books for an advance digital copy. The opinions are my own.