This Garden is Not Eden 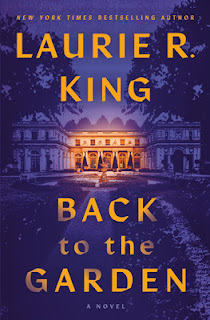 BACK TO THE GARDEN
Laurie R. King
Bantam Books
September 6, 2022
Laurie R. King is best known for her long-running Mary.
Russell and Sherlock Holmes Mysteries, but she has also written several excellent stand-alone novels. Back to the Garden falls into that category. The Gardener Estate is steeped in California history and has seen many transformations. It is reminiscent of the Hearst San Simeon Estate, with baronial interiors, exteriors, and extensive gardens. The Estate has always remained in the Gardener family's hands.   In the 1970s, the Estate rested in the hands of the "Old Bastard," always referred to by his grandsons." Fort" and Rob Gardener are the heirs to the Estate. "Fort" has already taken off for an ashram in India and disinherited. The rebellious and volatile Rob refuses to be part of his grandfather's plans. He joins the Army and is promptly sent off to Viet Nam. Only a cousin stays involved with the running of the Estate, but since his last name is not Gardener, he can't inherit.
When Rob returns from Viet Nam and inherits, he is still rebellious and volatile. He is also deeply immersed in the 1970s "counterculture." He and his partner, Meadow,
remake the house and grounds into an experiment in communal living. All sorts of people come and go from 1970s cultural icons to petty criminals. "Fort" reappears, still with no designs on the Estate, rather than a seemingly small request. All seemed well until Rob and Meadow decided to have an art and music festival, mainly to showcase the success of their experiment. On that weekend, everything changes. Meadow and "Fort" disappear, and the commune breaks up quickly. Currently, the Estate is managed by a Trust, and Rob is a hermit living on the grounds. The Estate has been returned to its former glory, and big plans are afoot. An immense statue, The Three Eves, has to be moved and shored up. A human skull and remains are discovered beneath.
Anyone who lived through the 70s might remember that there was also a surfeit of serial killers operating in America. Young women on the roads were killed and disappeared all over, particularly in California. When a Cold Case investigator, Racquel Laing from the SFPD, gets wind of the find, she thinks it would fit her case, that of The Highwayman. The Highwayman is in custody, but he is dying. Racquel is on a mission to find out who, other than the nine women they know about, fell victim to him. He isn't talking unless forced to, and Raquel is determined to find out every victim before time runs out. The intersection of the history of the Gardener family and the Highwayman is bound together.
Back to the Garden is an intricate and compelling read with King's signature full-bodied characters and atmospheric writing. Thanks to NetGalley.com and Bantam Books for an advance digital copy. The opinions are my own.
RATING- 4.5 Stars

Posted by omnireader at 5:03 PM No comments:

A "Witches Brew" of a Cozy Mystery 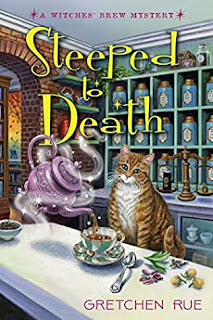 STEEPED TO DEATH
A Witches' Brew Mystery #1
Gretchen Rue
Crooked Lane Books
September 6, 2022
Sometimes a reader needs a break from the darker side of mayhem and murder and suspend disbelief for a few hours. The first in a new cozy series, Steeped to Death, fits the bill exactly. A picturesque small town, a gutsy heroine amid a life change, a companion cat, and a touch of magic are all present.
Phoebe Winchester is coming out of a divorce from her philandering husband when her beloved Aunt Eudora dies, leaving her a large Victorian house in the tourist-based village of Ravens Creek, WA. Along with the house comes Aunt Eudora's used bookshop/tea shop, the Earl's Study, and a companion ginger cat named Bob. Eudora was known for her sense of adventure and ability to blend unique teas with possibly magical qualities. In fact, many residents of Ravens Creek think she was a witch. Phoebe doesn't believe that for a moment since she spent many childhood summers with Eudora and saw no evidence of magic.
Everyone seems welcoming to Phoebe, except for Dierdre Miller, who accosts her at every turn. Dierdre wants to buy the house and business and doesn't accept "No" as an answer. Then there is Owen, owner of a shoe store nearby who doesn't miss an opportunity to insult her, and The Earl's Study. On the other hand, Phoebe meets a childhood friend, Rich Lofting (formerly Ricky), now a handsome P.I. living in an apartment over The Earl's Study. When Phoebe finds a dead body outside her store and she is being stalked, she doesn't know who to trust. Even stranger, it seems that Aunt Eudora might have been a witch after all, and Phoebe might have inherited her abilities and some of her own.
Steeped to Death is a promising beginning to a new series, one that is very enjoyable. Thanks to Crooked Lane Books and NetGalley for a digital copy. The opinions are my own.
RATING- 4 Stars
Posted by omnireader at 12:10 PM No comments:

A Long Ago Retreat Haunts Its Particpants 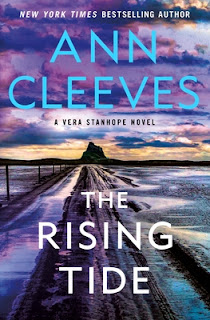 THE RISING TIDE
Vera Stanhope #10
Ann Cleeves
Minotaur Books
September 6, 2022
Ann Cleeves' newest Vera Stanhope mystery reaches back into the past for the motive behind a series of murders. Fifty years ago, a group of students at Kimmerston Grammar, brought together by their teacher, had a sort of retreat on Holy Island (Lindisfarne) and formed strong bonds that have lasted a lifetime. Five have gathered on the island every five years for a reunion. Those meeting this October include Rick Kelsall, a celebrity journalist whose career has come to a screeching halt by accusations of sexual harassment from an intern. There is also Annie Laidler, co-owner of a successful bakery/deli in Kimmerston; Philip Robson, an Anglican priest; Ken Hampton, a successful head-teacher now suffering from Alzheimer's, and his wife, Louise. Holy Island is connected to the mainland by a causeway, inundated by the rising tide once a day. On the first reunion, Isobel Hall left the island in a temper when the tide rose and was swept away in her small car. She is much remembered by the remaining group.
Vera has had no cases for a while that challenged her, so when news of a possible suicide on Holy Island reaches her, she secretly hopes for a murder. Rick Kelsall is dead, found hanging in his room by Annie. Rick had been surprisingly upbeat with his career in shambles, talking about new projects, including a novel. It does look like a suicide, but the postmortem shows that Rick was smothered with a pillow and strung up. This investigation, with the wives, ex-wives, friends, and the now-retired teacher who brought them together, will prove to be the most dangerous and tragic of her career. All her team is involved, particularly Holly and Joe Ashworth. Even the upstanding police commissioner, Katherine Willmore, has a connection to the group, making the case more political than usual.
The Holy Island, with its dangerous tides, mists, and the sound of foghorns, is almost a character on its own. Who, among this group of seemingly respectable seniors, is a dangerous killer, willing to do anything to keep the secrets of the past? The Rising Tide is a masterpiece of plotting, keeping me guessing until the end. The end itself is shockingly unexpected and may portend some changes for the irascible Vera. Ann Cleeves continues to provide mysteries that are not only puzzles but investigations into the human heart.
Thanks to Netgalley.com and Minotaur for an advance digital copy, The opinions are my own.
RATING  4 Stars
Posted by omnireader at 4:37 PM No comments: