Those Who Hunt the Night 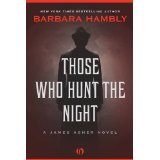 Those Who Hunt the Night was another great find at netgalley.com and comes from Open Road Media. It is the beginning book in the James Asher Series by Barbara Hambly. James Asher is an Oxford Don who is also a veteran of the "Great Game" of British espionage. After retiring, disgusted by the actions he has been expected to take in service to Queen and Country, he has married Lydia, a young woman he has loved for years and settled down to a peaceful life in Oxford, or so he thinks. Upon returning home one evening he finds his household staff and Lydia deep in unnatural sleep, and a vampire waiting in his study. Don Simon, an ancient Spanish vampire wants James to find out who is killing the vampires of London, and the life of both James and Lydia hang in the balance.

No sparkling, sexy vampires here! Most of the London vampires are evil creatures, steeped in blood and death. Don Simon is more enigmatic, appearing to retain at least a sense of honor. But, even if James and Lydia succeed-will he let them live with their knowledge of the reality of vampires?

Set in the first decade of the 20th century, this is a very atmospheric and thrilling vampire tale. Also, I find it refreshing to get back to the more traditional idea of vampires, beings who have lived so long, they are not even remotely human. There is also a sense that the life of a vampire is no bargain, truly more of an endless existence than anything to be sought out.

Those Who Hunt the Night is a tightly plotted and often frightening story with characters that are well-rounded, characters that I came to care about. I enjoyed it greatly-so much that I plan to start Book 2 (Traveling With the Dead) right away despite my ginormous TBR pile.

Check out this video from Open Road about and with Barbara Hambly.


Rating- 4 bats
Posted by omnireader at 3:53 PM No comments:

"A good book should leave you . . . slightly exhausted at the end. You live several lives while reading it." ~ William Styron 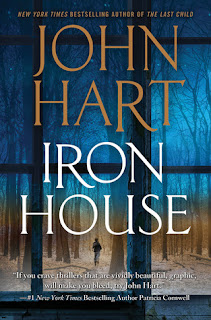 
"A good book should leave you . . . slightly exhausted at the end. You live several lives while reading it." ~ William Styron

I ran across this quotation from William Styron while in the process of reading Iron House and thought that it was particularly apt—I was more than slightly exhausted after reading this really fine thriller. I have been an admirer of John Hart’s work since The King of Liars. Iron House is several steps beyond that first novel in complexity and scope.
Michael is a professional killer whose allegiance since his teenage years has been to the only father figure he has ever known, Otto Kaitlin, racketeer and killer. Michael has met a woman that he loves and gets permission from the dying Otto to get out of the “life”. However, he knows that after Otto dies there are others in the organization that are not so willing to let him go. On the surface, Iron House is about what Michael has to do to make good his escape, but there is much more going on here; family, old sins coming to haunt the present and the possibility of redemption and change.
My thought at the outset was that Hart would have “a hard row to hoe” to convince me to like and root for a professional killer. However, he had me by Chapter Six. The early events of his life, and that of his brother, Julian, in the orphanage named Iron House are important pieces of the puzzle. Julian was adopted by the wife of a senator, and Michael fell into the hands of Otto Kaitlin, but Julian is by far the more wounded brother. There is literally nothing that Michael will not do to save those he loves from his enemies.
Iron House is meticulously plotted, proceeding at a breathtaking pace. The characters are well fleshed out and believable, from the wounded Julian to the wife of the sleazy senator to one of the scariest psychopaths I’ve ever encountered in a book. It is also extraordinarily violent but never falls into a “violence for violence’s sake” trap. Why only 4 ½ stars? The only element I found missing was a sense of place. The bulk of the action takes place in North Carolina, but the events could have taken place anywhere in America where poverty, ignorance and violence meet. As a native North Carolinian, I have always enjoyed that sense of place in Hart’s first three books. However, I doubt that my one small caveat will detract from any one else’s enjoyment of Iron House.
Rating-4 1/2 stars
Posted by omnireader at 5:50 PM No comments: