Something old is new again

I am a big fan of Margaret Maron's Deborah Knott series, but had never given much thought to reading the Sigrid Harald series. It just seemed too different from Deborah Knott to interest me that much. That was before I read the most recent Knott mystery, Three Day Town, in which Sigrid played a part. I found her an interesting character, one with an intriguing back story alluded to in Three Day Town. She will also be featured in Maron's upcoming The Buzzard Table.

As ONE COFFEE WITH ( first novel in an eight book series) was written in 1982, it was a bit like a trip back in time. No cell phones, PCs, etc. but as devices played no real part in the story, it was not particularly dated. Sigrid is a detective with the NYPD (one of the first females to reach that level) and she runs into all the male prejudices attendant, but as I don't think that has changed very much I didn't find it jarring. She is called in to investigate the poisoning of an art professor at the mythical NY City Vanderlyn College. During the course of the investigation, she meets characters who will play an important part in her life. The mystery itself is very well handled, but Maron is a much better writer today.

The characters are what interested me most in One Coffee With. Sigrid herself is blind to her own attractions, so I look forward to the development of her relationship with Oscar Naumann, Department Head at Vanderlyn. There is no doubt that I will read the rest of the series. All books in the series are once again available in digital form.

RATING- 3 Stars
Posted by omnireader at 7:26 PM No comments: 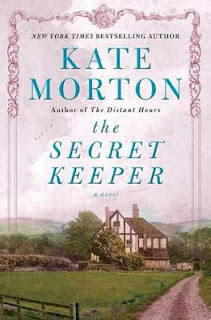 
Kate Morton has long been on my "to be read" list and when I received a galley copy from Atria Books, it looked like something that would be right up my alley. I have always enjoyed books that switch back and forth in time, showing how actions taken in one era can reverberate and affect later generations.

Laurel Nicholson is a successful actress living in London and her family of three sisters and one brother is gathering to celebrate the 90th birthday of their much-loved, vivacious mother Dorothy. Dorothy is fading quickly and it is clear to all that this will be her last birthday. Laurel's thoughts turn to the summer of 1961 on the day of another family birthday, when Laurel witnesses her mother committing an awful crime. Laurel backs up her mother's story and Dorothy is never charged with the crime. Dorothy and Laurel never discuss it again and Laurel knows she must find out what happened.

As Laurel begins to piece the story together the viewpoints switch back and forth from 2011 to 1941 during the blitz. We get pieces of the story from Dorothy's viewpoint, her friend Vivien Jenkins and Dorothy's then boyfriend, Jimmy. As Laurel learns more and more, she begins to be afraid that she never knew her mother at all. I really don't want to get too specific as this story has twists layered on twists and I don't want to drop any "spoilers"!

I will say that it was an emotional roller-coaster for me. Much of the book came from the viewpoint of a narcissistic, manipulative person who lives in a fantasy world and spreads destruction to all in her orbit. There were several times that I got so angry that I had to remind myself that she was only a fictional character. The characters in THE SECRET KEEPER are so vivid and the descriptions of wartime Britain so believable I could almost hear the air raid sirens. I became so involved in the story I found it hard to put down and I was afraid that all would be lost for these characters. Thankfully, all comes to a very romantic and satisfactory ending. I never saw it coming though!

THE SECRET KEEPER was a great read and one that I am not likely to forget. I will be reading more from Kate Morton.

RATING- 5 Stars
Posted by omnireader at 8:49 PM No comments: 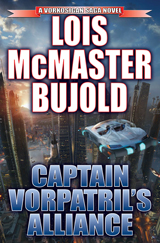 
I think all Vorkosigan Saga fans have been waiting for Ivan's book. Ivan Vorpatril is cousin to Miles and considered by just about all as somewhat indolent and a little "idiotish". Indolent Ivan may be but he has also been companion to Miles in some of his darkest hours and a staunch support in Miles' most hare- brained and hair- raising schemes. He is far from being an idiot as well even though he does love his comfort.

Ivan thinks his comfort will be safe in his new temporary posting to Komarr as staff officer to Admiral Desplaines. Not only is Miles far away on Barrayar, so is Ivan's formidable mother, Lady Vorpatril. Lady Alys is not at all subtle in her hints and efforts to get him married off to a suitable Vor maiden. It is long past time that he settle down and continue the Vorpatril line. All his comfort begins to disappear when Byerly Vorrutyer, secret agent for Imperial Security makes an appearance at Ivan's door. By has a small request, that Ivan become acquainted with a young woman who has just arrived on Komarr and appears to be in danger. Ivan has never been able to resist a damsel in distress especially a beautiful one like Tej Arqua. What could go wrong----- right?

By the novel's end Ivan has been in trouble with the Komarran authorities, his own superiors and with the people who are trying to either kill or abduct Tej and her gorgeous blue companion Rish. We learn a lot more about the inner workings of the Great (criminal) Houses on lawless Jackson's Whole and even return to favorite places and people on Barrayar. Miles himself, wife Ekaterin and children make an appearance as well as Lady Alys and former ImSec head Simon Illyan.

There is much humor and heart in Captain Vorpatril's Alliance. No one writes farce with as light a hand as Bujold and no one can combine it with insightful character portrayal so well. Ivan's book feels very much like a wrap- up of the series, even more so than Cryoburn (2010). I hope not as I am in no way tired of the Vorkosigans and their many worlds. I have always looked forward to seeing what Miles would accomplish in the role of Count especially combining it with being "My Lord Auditor". The Vorkosigan District has too long been without a resident Count while Aral, Cordelia and Miles have been making galactic history. Hopefully the Vorkosigan Saga will continue for a very long time. I highly recommend Captain Vorpatril's Alliance.

Posted by omnireader at 3:58 PM No comments:

The Shadowy Horses by Susanna Kearsley


Sourcebooks is doing readers a service by reprinting Susanna Kearsley's backlist (along with new titles), most of which have been next to impossible to get for a while, at least in the US. I read The Shadowy Horses in an old, musty dog-eared paperback edition a number of years ago and was delighted to get a bright shiny new ARC at Book Expo this year.

Verity Gray is an archaeologist who travels to Eyemouth in Scotland from her London home after hearing about a dig that her old flame, Adrian Sutton-Clark, is working on. Adrian is charming but somewhat immature when it comes to relationships. Verity decided that they were much better as friends than lovers. She is somewhat dismayed when she discovers that the object of the dig is the fate of the legendary 9th Roman Legion that disappeared in Brittania hundreds of years ago. She is charmed by the eccentric head of the dig, Peter Quinnell, and decides to sign on at the dig. It's a pity that the only basis for Quinnell's belief that the 9th Legion might be found at Rosehill are the visions of Robbie, a 9 year-old "seer". Verity is also intrigued by David Fortune, a Scots archaeologist who is working with Quinnell and is decidedly frosty to her. Rounding out the workers at the dig is Quinnell's granddaughter Fabia, a teenage femme fatale with a bad attitude and an agenda of her own. As work on the dig progresses Verity begins to have eerie experiences which convince her that Robbie has the second sight and can talk with a ghostly Roman Sentinel. She hears horses hooves thundering in the meadow every night (the shadowy horses of the title) and often feels that she is being followed by the Sentinel. When real evidence turns up pf a Roman marching camp it becomes evident that someone wants to sabotage the dig. Whether it is a ghostly or real enemy, she doesn't know.

As usual Susanna Kearsley gives us a supporting cast of wonderful characters. David's grandmother "Granny Nan", Robbie and his mother Jeannie are vibrant and alive. The atmosphere is just brooding enough and the slow building romance between Verity and David Fortune entirely believable. My only objection is that the ending feels a little rushed. I would have like to hear more of the story of the Sentinel and his beloved Claudia but will have to be satisfied with an ending that is very romantic in a quiet and understated way.

Many people have compared Kearsley to Daphne DuMaurier or Mary Stewart. I have to agree. Her novels have a kind of quiet romance that you don't often see in current novels. There is almost no sex- certainly not graphic- and no real violence. Kearsley's novels are the perfect reads for a cold fall or winter day spent wrapped up in a blanket.

Posted by omnireader at 3:34 PM No comments: