A Charming Beginning to a New Cozy Series

Rosemary and Crime by Gail Oust combines three of my favorite things: a plucky heroine, quirky supporting characters and food! Piper Prescott, a transplanted Yankee living in a small Georgia town, suddenly finds herself dumped by her husband of 20 years for a much younger ex-pageant queen. So, making lemons out of lemonade, she takes her divorce settlement and fulfills a longstanding dream, opening her own gourmet spice shop. It's a risky plan, since adventurous gourmet cooking is not exactly the thing in the land of fried chicken and pimiento cheese spread. Piper does, however, have a big plan for her grand opening. She persuades a local well-known chef, known not only for his cooking but his womanizing and temperament, to do a cooking demonstration. Too bad that the chef is found stabbed through the heart on the morning of the grand opening by none other than Piper herself. As the person who found the body Piper is the logical first suspect and the town's new Chief of Police thinks she looks good for it.

As evidence piles up against Piper-some planted- she enlists the help of her flamboyant best friend, Reba Mae. These two very accurately describe themselves as the Lucy and Ethel of crime investigation, getting themselves into trouble and driving Chief McBride crazy in the process. Piper is also dealing with a rebellious teenage daughter, her smarmy ex, the attentions of a charming veterinarian and an unexpected attraction to Chief McBride himself . When someone tries to run her down, she knows she will have to find the killer or face jail or worse.

Rosemary and Crime is a charming beginning to a new cozy series. I am looking forward to spending more time with Piper and the quirky citizens of Brandywine Creek, Ga.


Posted by omnireader at 5:05 PM No comments: 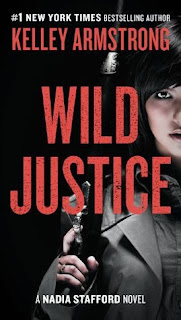 Wild Justice is a fitting and exciting ending for the Nadia Stafford Trilogy- one that fans of the first two have waited for for years. The book opens with a hit that has gone horribly wrong. Nadia goes into a complete tailspin and Jack (her hit man mentor) goes looking for her. When he finds her, he has a "gift". He has found Drew Aldritch, the man who kidnapped her and her cousin as early adolescents. He raped and murdered her cousin but Nadia escaped and survived. The experience scarred her emotionally, plaguing her with guilt and setting her on the path to life as a vigilante killer for hire.

By the time they pay a visit to Aldritch, someone else has gotten to him by a matter of minutes. Jack and Nadia need to find out who and why. Their journey takes them into the highest reaches of Canadian and American power and prestige in the search for a serial rapist and killer; one who has partnered with Aldritch in the past. Nadia discovers much that her family kept from her and much that she has kept from herself about that awful kidnapping. By the time we get to a very satisfying ending, most of Jack's many secrets are out in the open (finally). This is no hearts and flowers ending but a believable coming together of two very flawed people.

I had a minor quibble about Wild Justice while reading. I thought the bad guy almost a cartoon in his arrogance but upon reflection I thought he was probably just what a true megalomaniac looks like, especially one who is a good actor. Serial killers are usually not high profile types, dwelling in the shadows by inclination and necessity, and that was bothersome until I remembered a case of just such a high profile real-life killer in Canada in recent years.

It's a testament to Kelley Armstrong's writing ability that the reader can come to care about two people who kill for a living. That fact is never far from the mind, but one can almost understand. I highly recommend Wild Justice to thriller/mystery fans and if you haven't read the first two books- then you really should!


Posted by omnireader at 4:32 PM No comments:

In this sixth outing of the Dylan Scott Mysteries from Shirley Wells, Dylan is back in Dawson's Clough, going undercover in an operation with the local police. Dylan had participated in another operation when he was still with the London force. The target then and now is Joe Child, sleazy and violent drug dealer. Joe supposedly has gotten religion and now runs a commune that reaches out to the homeless and discontented in the area. Dylan knows from past experience of Joe that he has not reformed and is up to no good. The fact that two young women have disappeared from the commune has prompted the investigation and as always, Dylan won't stop until he gets answers despite serious problems at home.


Dylan is a very flawed, yet likable and believable character. When he gets his teeth into an investigation, everything else gets put aside. Deadly Shadows is a much darker story than some of the earlier books- sometimes it is difficult reading. But overall I like the way the series is going and look forward to the next in the series. I recommend Deadly Shadows to any fan of British mysteries.

Posted by omnireader at 2:43 PM No comments:

News from Alaska from the Very Funny Molly Harper

HOW TO RUN WITH A NAKED WEREWOLF
Molly Harper
Pocket Books
December 31, 2013

Molly Harper has been one of my favorite authors since reading Nice Girls Don't Have Fangs. Seldom has a book made me laugh out loud even on a second reading. Whenever a new book by Molly Harper is published I know that I will be thoroughly entertained and finish the book with a smile. How to Run With a Naked Werewolf is no exception even though it dips into some pretty serious issues.

Anna Moder, "Doc", has been in the background of the the two previous Werewolf novels. Physician to the quirky werewolf and human community of Grundy, Alaska, it's been clear that Anna has a story to tell. Anna has fled Grundy when How to Run With a Naked Werewolf opens. She has been running for several years from her abusive, obsessed stalker husband and has very good reason to be afraid. She does not hesitate to assist someone in trouble, however. The consequence are dire for Anna as she loses all the possessions she was able to bring on her headlong flight. Caleb Graham is a bounty hunter, part of the Graham werewolf pack. He seldom needs any help (werewolf strength and all that) but a hunt goes very wrong and he is badly injured. To repay Anna for her help, Caleb replaces her lost possessions and promises to get her to Fairbanks where a new identity is waiting. He just has a few stops on the way for bounty hunter business. Anna has major trust issues and Caleb appears to be pretty ethically challenged so it's a rocky road for both of them.

How to Run with a Naked Werewolf is filled with Molly Harper's trademark snarky humor even though the stakes for Anna are very high. She knows that a confrontation is coming with her stalker; one that she might not survive. The question is whether she can depend on Caleb or does he have underlying motives of his own? Highly recommended for paranormal romance fans who like a dose of laughter along with the romance. I would also recommend the audible audio editions read by the excellent Amanda Ronconi. Thanks to Pocket Books and netgalley.com for an advance digital copy.

Posted by omnireader at 11:45 AM No comments: