The Black Dagger Brotherhood, a mega-selling mass-market Paranormal Romance series by J.R. Ward is a publishing phenomenon. These books sell like the proverbial hotcakes. As of this writing, there are ten books published and more to come. Ward has brewed a heady mixture of the standard Gothic Romance conventions- tortured hero, female in jeopardy, suspense, adventure, hero redeemed by love for same female in jeopardy- added in large doses of somewhat kinky erotica and violence and put the whole mess on a steroid regimen- with vampires!
The basic premise is this- the vampires of mythical Caldwell, NY are a separate species, not at all the undead but pretty much immortal, at least until someone slaughters them. A centuries long war with a group called the Lessening Society is being fought to save the vampire race. Enter the Black Dagger Brotherhood, lethal, mega-sized, leather-clad, trash-talking, booted and vice-ridden vampires who battle the evil Lessors, who really aren't all that scary, especially since they are colorless and smell like baby powder(?). No kidding. You want tortured heroes with hideous childhoods-these brothers are the ones for you. But they mate for life and are redeemed by the women they love. Well, not really, but they do cut down on their self-destructive behaviors and come to terms with their various hideous childhoods.
I really don't know how I stumbled across the first book in the series, Dark Lover, but to say that I was underwhelmed is an understatement. First of all, I laughed my way through the glossary of terms that appears at the beginning and does so in every book. I'm still snorting my way through that glossary. Then, there are the names of the original brothers: Wrath, Rhage, Zsadist, Vishous, Phury and Tohrment. Are you seeing a pattern here? Throw in some extraneous letters- they still sound the same. After the original six brothers are dealt with in the series, we have Rehvenge, Dhestroyer and John Matthew (huh?). As the series progresses, female warriors have been added, along with a quasi-religious and social system that is mired somewhere circa 1174. The most recent entry introduces a cadre of Slayers from Europe who are even more anti-social than the original Brothers. I counted Dark Lover as a waste of good trees. However, I kept hearing buzz and decided that I must have missed something. No, not really.
So, after my snide comments-why am I still reading them? Well, I don't really know. Despite the names, the weak world-building, the egregious "branding" sprinkled throughout each book, the street lingo that I can't believe is spoken anywhere on this planet and the general silliness, I am hooked. Enough to download them free from the library, anyway. In spite of, or maybe because of all their faults these books are oddly compelling. Ward is one heck of a story-teller and the Black Dagger books have a breakneck narrative flow that just drags you with it. The best analogy I can come up with is the compulsion to rubber-neck a traffic accident. It's a guilty pleasure and so is the Black Dagger Brotherhood.
Posted by omnireader at 7:51 PM No comments: 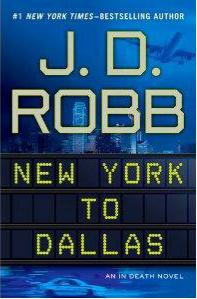 
Number 33 (!) in J.D. Robb's (Nora Roberts) IN DEATH series is a departure in both title and location for this long-running, bestselling series. I have been a sucker for this series since the beginning and look forward to each new release. In fact, it is a must have on the day of release for me, despite the fact that I found the last three or four to not quite measure up to the previous books. New York to Dallas is a home run, however, and I think I can put my fears to rest about the series winding down. Thirty-three novels in one series is pretty amazing but then Nora Roberts is amazingly prolific.


Eve is summoned to Dallas to engage in a battle of wits with Isaac McQueen, a violent pedophile known as "The Collector". Eve put him away twelve years earlier when she was still a  rookie beat cop in New York. Somehow, McQueen has managed to escape and kidnap one of the girls that Eve rescued from his "collection". McQueen wants payback and to outwit her this time around. As any reader of the series knows, the city of Dallas has great significance to Eve. She was given the name last name Dallas when she was found wandering there as an 8 year old. Beaten and abused, she had no memory of her own name. Eve has been dealing with the issues left from her horrific childhood throughout the series. This time, she is back in Dallas dealing with those issues (and a very big one gets wrapped up in New York to Dallas), along with the politics of working with an unknown police force and without her usual assorted New York back-up. Of course, she has her husband, Roarke. I can only say that every woman should have back-up like Roarke!


New York to Dallas is an emotional roller coaster ride, suspenseful and well-plotted. While I missed the characters I know so well, Peabody, Feeney, Mavis, and Somerset, who were not present for the bulk of the action, there were enough new characters to keep me interested. Isaac McQueen is an evil psychopath who needs to be taken down, and Eve is just the woman to do it. I have listened to, rather than read all the In Death series. Susan Erickson is a superlative narrator and pitch perfect for all the characters. Very highly recommended, with the warning that this book is not the one to start the series with.


Posted by omnireader at 5:51 PM No comments: