Product Description-Atticus O’Sullivan, last of the Druids, lives peacefully in Arizona, running an occult bookshop and shape-shifting in his spare time to hunt with his Irish wolfhound. His neighbors and customers think that this handsome, tattooed Irish dude is about twenty-one years old—when in actuality, he’s twenty-one centuries old. Not to mention: He draws his power from the earth, possesses a sharp wit, and wields an even sharper magical sword known as Fragarach, the Answerer.

Unfortunately, a very angry Celtic god wants that sword, and he’s hounded Atticus for centuries. Now the determined deity has tracked him down, and Atticus will need all his power—plus the help of a seductive goddess of death, his vampire and werewolf team of attorneys, a sexy bartender possessed by a Hindu witch, and some good old-fashioned luck of the Irish—to kick some Celtic arse and deliver himself from evil.

I really loved this first book of a back-to-back trilogy-it was more fun than I've had for a long time! Atticus is a great character, one who has seen it all in his twenty-one centuries of life, yet manages to keep himself young in body through his magic, and young in mind through total immersion in pop culture. He is the last of the Druids and plans to keep on living despite being on the hit list of several fae baddies, primarily Aenghus Og, the Celtic God of Love. The book opens with an ambush by fae hit men and the action never stops. Along the way we meet the Morrigan, Bridget and many others in the Celtic pantheon.

While Atticus is a strong character, the supporting cast is as well drawn and fascinating as he is. Especially his Irish Wolf Hound, Oberon, with whom he has a speaking mind bond. The exhanges between hound and master are not only humorous, but endearing. Any dog lover would enjoy the relationship, and wish for a bond like it. Full of laughs and action, this is a feast for the urban fantasy lover, despite what I saw as a couple of small holes in the plot. The best part is that the next two books are coming soon!

Posted by omnireader at 9:54 PM No comments: 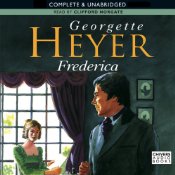 
Product Description-Rich and handsome, the hope of ambitious mothers and despair of his sisters, the Marquis of Alverstoke sees no reason to put himself out for anyone. But when a distant connection applies to him for help, he finds himself far from bored.


I have been feeding my other addiction lately, audio books, with the works of Georgette Heyer, a tremendously prolific British writer most active in the 1930s and 40s. I had read some of her mysteries years ago and found them interesting period pieces and not much more. As I was in my book snob phase at the time I turned my nose up at the label "regency romance" and never read any of her other work. Was I ever wrong! One day I was checking on Audible and noticed that her titles had glowing reviews for both the stories and the narrators. Her books are better described as comedies of manners reminiscent of Jane Austen, full of wit and charm and yes, romance. I have listened to several, but Frederica is my favorite.


The Marquis of Alverstoke, rich and easily bored, is not known for his benevolence. When he is approached by a distant relation, Frederica, and asked to sponsor her beautiful sister, Caris, in a London season, he decides to comply. This is no kindly impulse on his part-he simply wants to annoy his sisters who also have daughters to launch into the matrimonial pool. He finds Caris to be a beautiful "ninnyhammer" but to his own surprise becomes more and more involved with Frederica and her brothers, Jessamy and Felix. Having never had a happy family life, he is enchanted by the family and Frederica in particular, the one woman who never bores him.


Frederica is full of humor with many laugh out loud moments and a wonderful "happy ever after" ending. The evolution of the Marquis from a cold, selfish man to a loving one is a pleasure not to be missed, ably narrated by Clifford Norgate.

Posted by omnireader at 4:48 PM No comments:

The Return of Lady Julia and Brisbane


Product Description- Partners now in marriage and in trade, Lady Julia and Nicholas Brisbane have finally returned from abroad to set up housekeeping in London. But merging their respective collections of gadgets, pets and servants leaves little room for the harried newlyweds themselves, let alone Brisbane's private enquiry business. Among the more unlikely clients: Julia's very proper brother, Lord Bellmont, who swears Brisbane to secrecy about his case. Not about to be left out of anything concerning her beloved—if eccentric—family, spirited Julia soon picks up the trail of the investigation. It leads to the exclusive Ghost Club, where the alluring Madame Séraphine holds evening séances…and not a few powerful gentlemen in thrall. From this eerie enclave unfolds a lurid tangle of dark deeds, whose tendrils crush reputations and throttle trust. Shocked to find their investigation spun into salacious newspaper headlines, bristling at the tension it causes between them, the Brisbanes find they must unite or fall. For Bellmont's they'll face myriad dangers born of dark secrets, the kind men kill to keep….


I was delighted to get the galley for The Dark Enquiry and meet Deanna Raybourn at the same time as I have been a fan of the series since the first book, Silent in the Grave. Silent in the Grave has one of the best "grabber" openings ever---"To say that I met Nicholas Brisbane over my husband's dead body is not entirely accurate. Edward, it should be noted, was still twitching upon the floor". If that doesn't catch your attention, nothing will! One of the thing I enjoy most about the series is the way Ms. Raybourn plays with classic forms in her books, from whodunit to country house murder to gothic thriller.


The Dark Enquiry carries on the quality seen in the previous four books with a solid mystery and a good foundation for a long running series-I hope! The enigmatic half gypsy, half Scots Brisbane is becoming less inscrutable and more willing to show his feelings. Julia is becoming his investigative partner in truth, yet coming to understand why Brisbane is often overbearingly protective of her. So often a series with a romantic partnership comes to a halt after marriage, but I think Ms. Raybourn has jumped that hurdle. Both Julia and Brisbane are so complex that I can foresee enough complications to keep me interested.


Some, but not all of Julia's huge and eccentric family make an appearance and "The Mad Marches" are as entertaining and exasperating as ever. However, I do miss Monk, Brisbane's former mentor and majordomo. Hopefully, we will see more of him in the future.


By the way, if you are an audio book fan, the audible download editions are excellent and highly recommended.