More fun with Veronica and Stoker 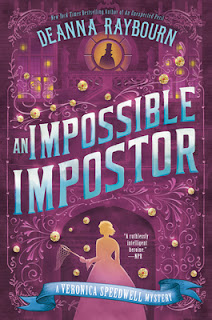 AN IMPOSSIBLE IMPOSTOR
Veronica Speedwell #7
Deanna Raybourn
Berkley Books
February 15, 2022
Veronica and Stoker have just returned from their adventures in the tiny principality of Alpenwold and are hoping to resume their work on Lord Rosmorran’s ever-growing collection.
Soon after their arrival, they have a visit from Sir Hugh Montgomerie, head of the Special Branch of Scotland Yard and sometimes right-hand man to the Queen. Sir Hugh has a favor to ask, that Stoker and Veronica visit a family of his long acquaintance. The Hathaway family has thought for years that the heir, Jonathan Hathaway, was killed in the catastrophic eruption of Krakatoa, but a man purporting to be him has returned. Veronica was with Hathaway and another man on the ill-fated expedition. Veronica has always believed that both were killed. Sir Hugh also wants them to check on the well-being of Euphemia “Effie” Hathaway, his god-daughter. He sweetens the deal for Stoker with a promise that there might be a specimen of a “Tasmanian Tiger” at Hathaway Hall and butterflies for Veronica.
Upon arrival, they find a household in turmoil, a miserable Effie, a managing and social-climbing wife to Charles Hathaway, the younger brother to Jonathan, and the estate’s present owner. There is also a dragon of a mother-in-law. Upon introduction to “Jonathan,” Veronica gets the surprise of her life, and so does the reader! The secret of his identity is one she can’t reveal, especially to Stoker. It’s hard to believe that Veronica was ever a romantic fool, but everyone is young once.
An Impossible Impostor is full of chases, kidnappings, escapes, stolen Indian jewels, supernatural happenings, and threats to life and limb. Of course, one has come to expect all that from a Veronica Speedwell novel. The Impossible Impostor himself is just that, impossible indeed. There is the introduction of a new villainess, one I would expect to see again. Isabel MacGregor is not the type to be forgiving when thwarted. The novel ends with a bit of a cliff-hanger, but it only whets the appetite for the next book in the series.
Thanks to NetGalley and Berkley for an advance digital copy. The opinions are my own.
RATING- 5 Stars
Posted by omnireader at 11:05 AM No comments:

Profane, Blackly Funny and a Must-Read 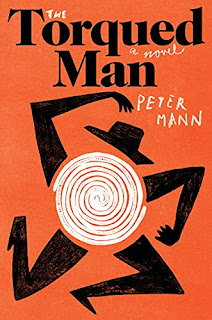 When I began reading The Torqued Man, I was unsure whether it would be for me, as espionage is not my usual genre. However, I do have an enduring interest in the WWII era. The Torqued Man is in two journals, one by Adrian De Groot, a minor functionary in the Nazi Party intelligence agency and a translator. Adrian comes from an impoverished family of merchants but has the advantage of a good education. Not aligned with Nazi Party politics or philosophy, De Groot hopes to keep his head down and survive. He is also used to recruit agents to infiltrate Ireland and build sentiment for a German invasion. He recruits Frank Pike (also known as Finn), a rabble-rousing IRA fighter. After becoming disenchanted with current IRA leadership, Pike joins the International Brigades and lands in one of Franco's infamous Spanish prisons. From Pike's viewpoint, Adrian's offer is a life-saver. Pike is a riotous, completely undisciplined person whose veracity cannot be trusted on any level. De Groot and Pike are unreliable narrators on an epic scale and become irretrievably entwined as the Reich falls.

The Torqued Man is a "can't put it down" adventure story of one of the most destructive eras of world history and an exploration of the human heart. It is blackly funny, profane, and entirely unexpected with characters, even minor ones, who jump off the page. It is also replete with literary allusion and, in my opinion, impeccably researched. I have always wondered how Germany went so off the rails. One can't ignore the connections to our era. If you put the worst of society, unscrupulous, immoral, ignorant, and steeped in racial animus, in charge of the house, don't be surprised when the roof falls in.

I can't imagine that The Torqued Man will not be one of the top books of my reading year. Thanks to Harper and NetGalley for an advance digital copy. The opinions are my own.

RATING- 5 Stars
Posted by omnireader at 9:55 AM No comments: