Start The Day with a Raccoon on the Loose... 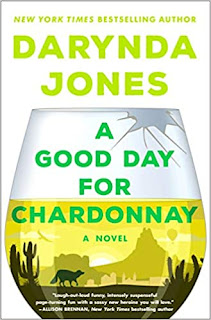 A  GOOD DAY FOR CHARDONNAY
Sunshine Vicram #2
Darynda Jones
MacMillan Audio
Narr: Lorelei King
July 27, 2021
It's a normal day in the mountainous tourist town of Del Sol, NM. Sadly, four months into the tenure of Sheriff Sunshine Vicram, she knows that "normal" means anything can happen and usually does. How on earth her parents managed to put her name in for the election without her knowledge and win is beyond her understanding. But it brought her and her teenage daughter, Aurora, back to her hometown. For good, at least until the next election, unless the Mayor decides to fire her. Sunshine's day starts with a raccoon on the loose in town, wreaking havoc. No sooner than he is captured, the day escalates into a bar fight with one seriously injured fighter and two others on the lam with another soon-to-be-dead fighter, based on the volume of blood left behind. Successful moonshine distiller and ex-bad-boy Levi Ravinder was also in the fight and seriously injured but refused to go to the hospital. Sunshine knows he isn't guilty of anything, but as usual, he isn't talking. Add to that the ongoing mystery of Sunshine's abduction fifteen years earlier, Aurora's pursuit of a serial killer responsible for several missing persons over the years, and the fact that someone in the Ravinder family is trying to kill Levi makes for an action-packed story. Not to mention the raccoon who managed to escape his cage.
I enjoyed Darynda Jones' first series, One Foot in the Grave, but I like this one even better. All the supporting characters are quirky and entirely believable: Sunshine's parents, her hunky deputy, and life-long best friend, and the other staffers at the station. Even the old lady who confesses to every crime in town is not beyond belief. Best of all is the loving relationship between mother and daughter. There are plenty of laughs in A Good Day for Chardonnay and a puzzling mystery to boot.
Thanks to NetGalley and MacMillan Audio for an advance digital copy. Lorelei King is one of my favorite narrators, so it was great to hear her telling the story. I am looking forward to the next one.
RATING-4.5  rounded up to 5 Stars.
Posted by omnireader at 10:10 PM No comments: 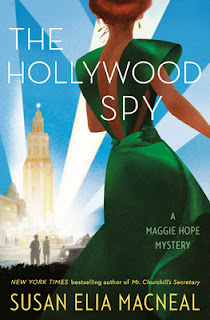 THE HOLLYWOOD SPY
Maggie Hope # 10
Susan Elia MacNeal
Bantam Books
July 6, 2021
The tenth book in the Maggie Hope series takes Maggie back to the United States, her native land. Not the Massachusetts of her youth, but sunny Hollywood, CA. She has come at the behest of Flight Commander John Sterling, her former fiancé. John can no longer fly, but the British Government has sent him to work at the Disney Studios in the propaganda film wing. While in Hollywood, he met a young woman named Gloria Hutton, fell in love, and broke the engagement. The young woman drowned in a swimming pool at the famous Garden of Allah Hotel. The death was declared an accident, but John is confident that it was murder. Who better to investigate than Maggie? Maggie is understandably somewhat reluctant, but when her ballerina friend, Sarah Sanderson, gets a job making a film with the famous George Balanchine, she decides to go.
Maggie arrives in Hollywood and sees an America that she never expected. Far from the united front she expected, Los Angeles is a hotbed of racism and segregation like in the Jim Crow South: if not in law but fact. Organizations like the German-American Bund and the KKK have gone underground after Pearl Harbor, but they are still active and plotting. The American Nazi Party is alive and well. Maggie's first day in 1943 Hollywood sees the first of the Zoot-Suit Riots; when American service members face off with Hispanic Angelinos. As Maggie and John investigate Gloria's death, it appears that she might be involved in all the seething politics. The notoriously corrupt LAPD has no interest in what they find, except for one honest cop.
The Hollywood Spy is intensely atmospheric, hot and sultry, and full of secrets. I learned so many things that I had not known or of which I was only dimly aware. MacNeal does meticulous research, as witnessed by her sources at the end of the book. For example, she used the word "surreal" to describe the similarities between the societal problems of 1943 and what we are facing today. I can't agree more with that assessment. I highly recommend The Hollywood Spy, both as crime fiction and a fast-paced mystery.
Thanks to NetGalley.com and Bantam Books for an advance digital copy. The opinions are my own.
RATING- 5 Stars

Posted by omnireader at 9:44 PM No comments: