Amanda Stevens has quickly hit one of the top spots on my "Must Read" list. The second book in her Graveyard Queen series, The Kingdom, is available after what seems like a very long wait. Amelia Gray, graveyard restoration expert, has been hired to restore another graveyard, this one in Asher Falls SC. After the harrowing events in her last job in her Charleston hometown, she sees it as a chance to regroup. Not only did she almost lose her life, she opened herself to all sorts of problems by falling in love with Detective John Devlin of the Charleston Police. Amelia can see ghosts and one thing she can't do is allow herself to be influenced by them. John Devlin is haunted and pursued by the spirits of his dead wife and daughter. Amelia must not, at any cost, allow herself to become more deeply involved with Devlin or she risks losing all control of her life. Control has always been Amelia's most cultivated characteristic.


Upon arriving in Asher Falls, Amelia finds that it is far from the quiet respite she was hoping for. Not only are there more ghosts around than she has ever seen in one place, the living population is pretty strange and unwelcoming. In fact, the atmosphere in Asher Falls is steeped in malice. Add in three "weird sisters", a flooded abandoned cemetery from which the bells toll, the absolute control of the town by one family and an abandoned grave in the hills that draws Amelia and you have quite a supernatural stew. Not to mention a son of the first family who takes a lot of interest in Amelia, but whose motives she questions. By the time she leaves Asher Falls Amelia's life is once again in upheaval and she questions whether her abilities have a larger purpose that she has been ignoring.


I can't say that I have ever been a big fan of spooky, scary books but The Graveyard Queen series is so well-written that I was sucked in from the first page. I read The Kingdom in one sitting, racing to see what happens next. The Kingdom is highly recommended- with a real twist at the end. Thankfully, the third installment, The Prophet, is out in June.

Posted by omnireader at 8:58 PM No comments:

Number 3 in the Dylan Scott Mysteries 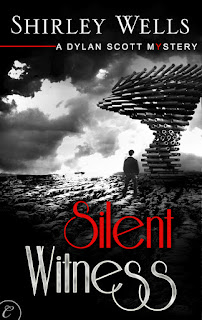 I have greatly enjoyed the Dylan Scott series by Shirley Wells from Carina Press. I think that the third novel in the series, Silent Witness, is the best so far. Having had success in his first two cases as a private investigator, Dylan hasn’t had much work lately and with a brand new baby in the family, he is worried. His aging hippie mother, Vicky, asks him to take on the case of the son of old neighbors of hers. Alexsander  Kiminski is in prison for the murder of his ex-wife and protests his innocence. The ex-wife was found in her bath with a slit throat and Aleksander’s fingerprints are all over the tub. After meeting Aleksander in prison, Dylan is not very hopeful but pursues the case before making up his mind. Dylan himself spent time in prison on a bogus charge and is sympathetic.

Shirley Wells has written a very well plotted mystery peopled with some very memorable characters. I was fooled completely by the killer, one that would have been my very last choice.  Dylan himself is very appealing, dogged in his pursuit of justice, but clueless about what is going on in his own family. I particularly like the way Wells weaves the accounts of his family into the mystery itself. Silent Witness is somewhat darker than the previous novels, but I liked it very much. Silent Witness is highly recommended for fans of British mystery.

Thanks to Carina Press and netgalley.com for an advance readers copy.

Posted by omnireader at 4:59 PM No comments: