Exciting but Somewhat Disappointing Entry in the Newbury and Hobbes Series


It seems like a very long time between the release of The Immorality Engine, # 3 in the Newbury and Hobbes Series and #4, The Executioner's Heart. In my opinion, Newbury and Hobbes is one of the best steampunk series out there, but I was vaguely disappointed. I don't know whether it was the long wait, but many of the events described as happening in the past seemed unfamiliar to me. In The Executioner's Heart a hired killer has surfaced in London; a woman, beautiful, heavily tattooed and showing a porthole on her chest with her withered heart visible. She is killing the Queen's Agents, cracking their chests open and stealing their hearts. Bainbridge, Newbury and Miss Veronica Hobbes are called in to find the killer, but both the Queen and the Prince of Wales are throwing obstacles in their way. In addition a level of distrust has developed among the three partners.

George Mann has the ability to construct characters that are grotesque but believable. The Executioner herself is completely mad, but oddly sympathetic. Queen Victoria is like a particularly malevolent spider in a web of machinery keeping her alive. There is literally nothing that she won't do to expand her power. The characterization in The Executioner's Heart is as strong as ever, but the mystery of who hired the killer is somewhat obvious. I was also surprised that the shattering event that serves as a cliff-hanger for the next in the series is revealed in the first chapter.


As I said, I was vaguely disappointed but will be looking forward to the next in the series, The Revenant Express.

RATING- 3 Stars
Posted by omnireader at 10:58 AM No comments:

The Demon Trapper's Daughter was a great surprise for me and exactly what I needed for a hot summer day's read. I had not heard of it until I read positive reviews on goodreads from Maria V. Snyder and D.B. Jackson. As they are two of my favorite Fantasy authors I decided to give the book a try and was not at all disappointed. Even though I tend to steer away from books billed as YA (I can hardly keep up with my "Adult" TBR list) The Demon Trapper's Daughter was pure escapist fun.

Riley Blackthorne is seventeen and living with her father,the legendary trapper Paul Blackthorne, in Atlanta. Riley has always wanted to follow in her father's footsteps and is now his apprentice. The two have only each other as Riley's mother died of cancer several years earlier. Paul was not always a trapper; he was a teacher and the family lived in tony Buckhead. That was before the economy collapsed and her mother got ill. Saddled with huge medical bills and the loss of his job and home, Riley and Paul live in a small apartment.


The Demon Trapper's Daughter has a well constructed dystopian world and very memorable characters. There is plenty of action; Hell is sending in demons to take over the city and only the Trapper's Guild stands in it's way. Since a very powerful Level Five Demon has Riley in his sights, it may be up to her to stop the Apocalypse. I can see that I will be reading the four books in the series in very short order!

MURDER AS A FINE ART
David Morrell
Mulholland Books
May 2013

It is 1854 and London is being terrorized by a series of senseless, savage mass murders which mirror those of 43 years earlier, "The Ratcliffe Highway Murders". Thomas De Quincey, who scandalized England with his "Confessions of an English Opium Eater" also wrote an account of the Ratcliffe Highway Murders which seems to be the blueprint for the new murder spree. Naturally the powers that be would love to pin the crimes on De Quincey. De Quincey himself is an unlikely suspect as he is small, thin, elderly and suffers from a life-long opium addiction. Without the help of his capable daughter, Emily, and two members of the Constabulary, De Quincey will no doubt swing for the crime.

Murder as a Fine Art moves through every level of British society, from the lowest strata to the upper echelons of British government. I have always had a fascination with the Victorian Era, because it is so alien to our own; yet at the same time is a mirror for us. The same ever widening divisions between the "haves" and the "have-nots" are at play today, as well as the deep strain of hypocrisy and callousness in our public life. All of this is touched upon in Murder as a Fine Art, as well as a suspenseful and harrowing crime story. We get to take a walk in the mind of a murderer that is both illuminating and deeply disturbing.

I highly recommend Murder as a Fine Art to fans of historical fiction and crime.

I wish I had better things to say about Hunted(Iron Druid #6). The Iron Druid Series has been a favorite since the first three were brought out in quick succession a couple of years ago. I loved the originality and especially the internal dialogue between Atticus and Oberon, his wolf hound. This book just didn't feel like it went anywhere in terms of advancing the story line. In terms of other movement- there was plenty. Atticus, Oberon and Granuaile were running (literally) through Europe, pursued by two angry goddesses, Artemis and Diana.


The three companions have managed to get just about all the gods of all the pantheons angry, mostly due to Atticus' ill-considered actions. Not only that- Loki, the Norse god of fire wants to start Ragnarok, the end of all the worlds. Not to mention the vampires, fairies and dark elves. I feel that there is just way too much going on. There were things that I enjoyed but I found myself easily putting down the book to do something else. I still love Oberon- the dialogue remains fresh and funny. I don't doubt that I will read the next book but it will probably not be a day of release read.

RATING- 3 Magical Swords
Posted by omnireader at 5:50 PM No comments:

With The Solitary House, award-winning author Lynn Shepherd introduced readers to Charles Maddox, a brilliant private detective plying his trade on the gaslit streets of Dickensian London. Now, in this mesmerizing new novel of historical suspense, a mystery strikes disturbingly close to home—and draws Maddox into a world of literary legends, tormented souls, and a legacy of terrible secrets.

John Charming isn't your average Prince... He comes from a line of Charmings -- an illustrious family of dragon slayers, witch-finders and killers dating back to before the fall of Rome. Trained by a modern day version of the Knights Templar, monster hunters who have updated their methods from chain mail and crossbows to kevlar and shotguns, he was one of the best. That is-- until he became the abomination the Knights were sworn to hunt. That was a lifetime ago. Now he tends bar under an assumed name in rural Virginia and leads a peaceful, quiet life. A life that shouldn't change just because a vampire and a blonde walk into his bar. Right?


I was delighted to get my hands on advance copies of these upcoming titles. Laurie King is a favorite, and even though The Bones of Paris is not a Russell/Holmes mystery, Ms. King is a writer I always enjoy reading. I have not read The Solitary House but it was very well-received and I probably will read it very soon. Charming looks like fun and comes with a positive blurb from Kevin Hearne.  Reviews will be forthcoming closer to the publication date.

Posted by omnireader at 2:04 PM No comments:

A Short Visit to Deadwood SD with the hilarious Ann Charles 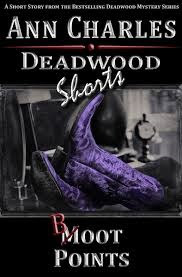 I'm a big fan of Ann Charles' two series, the Deadwood series and the Jackrabbit Junction series. I am always happy when she gives us a taste of her worlds between major full length releases. Boot Points is a short story from the Deadwood Series, somewhere between #3 and#4. Violet's Deadwood SD is a fun mixture of mystery, romance and the paranormal written with Ann's great sense of humor. Violet Parker is the single mother of twins, Layne and Addie, and has had her share of bad luck. Her sister, "the daughter of Satan" and her cheating ex, father of her twins, being just a part. Now that she has settled in Deadwood she is being plagued by trouble of the supernatural variety. Boot Points explained the importance of Violet's purple boots in her life and the loyal back-up of quirky characters she has acquired. Just about all of her back-up makes an appearance, not least "Doc" Nyce, Violet's current (and maybe forever)love interest.

There are also three short stories,"Dancing with Dialogue","Rainstorms" and "Metro Madness"; also a deleted scene from Nearly Departed in Deadwood. The stories are a good example of Ann's evolution as a writer. Now that she is writing full-time I am hoping to see much, much more!

RATING- 5 Purple Boots
Posted by omnireader at 7:20 AM No comments:

The Longings of Wayward Girls

Set in a middle-class Connecticut neighborhood, The Longings of Wayward Girls explores the events of three summers that have a profound effect on the lives of it's residents. A school age girl has gone missing in the neighborhood in 1974 and 1979, and twenty years later Sadie Watkins, a child herself at the time of the disappearances, is a mother and a wife living in the same community. Sadie is married to a good man but is suffering from the effects of many miscarriages followed by the late-term loss of her third child. When a boy that Sadie had a crush on years ago reappears after years away Sadie is tempted to throw away everything for his sake. As events unfold we discover not only the secrets of the missing girls, but those of Sadie's own family.

Beautifully written, The Longings of Wayward Girls summons up the heat, light and smells of childhood summers. It also accomplishes what is almost impossible, at least for me, an emotional investment in a character that I can neither like or relate to. Sadie is almost completely self-absorbed both as child and woman. As a child she is capable of carrying out a sustained prank on another child; a child who is extraordinarily vulnerable. As a woman she can only see the effects of her actions on herself. The fact that I was carried away by the narrative is a testament to Karen Brown's writing. I can't say that The Longings of Wayward Girls will ever be a favorite summer read, but I did enjoy it for the writing and masterful interweaving of timelines.

Thanks to Washington Square Press (Atria) and netgalley for an advance digital copy in return for a free and fair review.

Posted by omnireader at 3:29 PM No comments: