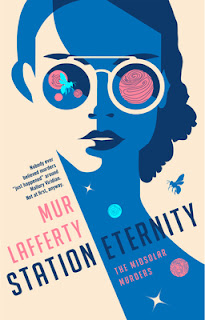 Sci-Fi is not my usual genre. I have read only one series in its entirety: Lois McMaster Bujold's Vorkosigan Saga, and that multiple times. The premise of Station Eternity caught my interest immediately. Mallory Viridian has a long-standing problem. Over and over, she finds herself at murder scenes and seems to be the only person who can solve the murder. She has only failed in very few cases. Unlike Jessica Fletcher of "Murder She Wrote" fame, it hasn't made her in demand at parties. The cops hate her and have prevented her from finding jobs. What remains of her family hate her after the murder of her uncle. Her cousin's subsequent arrest and conviction for the crime and her failure to exonerate him are the last straw. Earth's "First Contact" with aliens has just occurred, and Mallory asked for sanctuary aboard Station Eternity, a sentient space station. What could go wrong with no other humans on board?

However, there are two other humans, the Earth Ambassador and a person Mallory knows from her college days. Xan was a casual friend who later joined the US Army. He was also a chief suspect in a murder Mallory couldn't solve. He was reportedly abducted by aliens the same night the murder occurred. The station is a bit of a prima donna, and she houses several alien races. The wasp-like Sundry seems to have a particular fascination with Mallory. She has befriended Stephanie, the giant Gneiss, made of rock. The Gurudev are insect-like stick figures, and the Phantasmagores can blend into any background. One similarity is that they all can form symbiotic relationships with other species and find humans lacking because humans cannot. Even Eternity has a symbiote; a Gurudev, Ren, is murdered, and everything goes to hell in a handbasket. A shuttle is headed from Earth and loaded with VIP visitors, the first to be allowed. Eternity goes mad and partially destroys the shuttle.

Station Eternity is a wild ride full of unique, often hilarious, and sometimes horrifying characters. It keeps you guessing until the end with non-stop action. Who will survive, and why is Mallory's estranged aunt aboard the shuttle?

Thanks to Netgalley and Ace for an advance digital copy. The opinions are my own.

Posted by omnireader at 2:58 PM