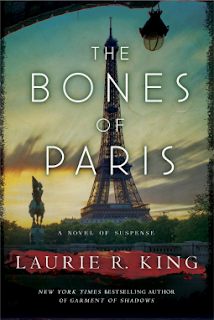 
The Bones of Paris (Harris Stuyvesant #2) is set in Jazz Age Paris in 1929.  After World War I Paris was flooded with American expats escaping US Prohibition and diving into the Art Scene and fleshpots of Monmartre and Montparnasse. One of the most popular songs of the day included the line, "how you gonna keep them down on the farm after they've seen Paree?" Paris was cheap and wide open to young men and women who wanted nothing more than to live it up with no restrictions after the devastation of the "War to end all Wars". Such expats included Hemingway, Fitzgerald, Josephine Baker, Man Ray, Lee Miller, and Ada "Bricktop" Smith. After a decade of partying though, the shine is wearing off and the party is getting meaner.

Harris Stuyvesant, American PI and ex-FBI agent is down on his luck in Berlin when a letter catches up to him asking him to find Philippa "Pip" Crosby, a 22 year old girl who has gone missing in Paris. After a year of living in Paris and writing home faithfully, nothing has been heard from her since March and it's now the end of August. The writer of the letter, Pip's uncle, believes that Harris may have met her at some point in Paris. Met her indeed- the two had a five day "fling". Harris desperately needs the money offered and knowing Pip as he does, thinks she has just run off with friends, forgetting to write. When he gets to Paris she has literally disappeared without a trace. No one can remember seeing her for months and nothing is missing from her apartment, other than her passport.  Her roommate, Nancy, has been away herself and knows nothing. But Nancy and Harris begin to fear the worst as they learn of a string of missing persons in Paris and the surrounding area. Paris has gotten mean in truth and the evil centers on the Theatre Grand-Guignol, where simulated death and dismemberment is entertainment.

I am a big fan of Laurie King's Russell and Holmes books and the Kate Martinelli books. No one can evoke far off times and places quite as well as Ms. King. She does this through exhaustive research and evocative prose. I had read almost all her books, but not "Touchstone", which introduced Bennett Gray and Sarah Gray, Harris's lost love. It was not a problem, but I plan to remedy that very soon. For one thing, I'd like to see Harris in a less "tattered " condition than in The Bones of Paris. Drinking and brawling too much, his disillusionment makes him the perfect "noir" detective, but not a healthy one. I highly recommend The Bones of Paris for fans of historical fiction, colorful characters and meticulous plotting.

Posted by omnireader at 6:47 AM No comments:


Delia's Shadow is a combination of a ghost and detective story with a little romance thrown in for good measure. Set in San Francisco in the years following The Great Quake and prior to World War I, I thoroughly enjoyed  the blending of both period detail and mystery. Delia Martin lost her parents in the Quake and was taken in by the family of her best friend, Sadie. On top of the loss of her parents, Delia can see the ghosts of the disaster's victims- some of whom seem to be haunting her particularly. After several years of this Delia flees to New York and is free of the ghosts for several years. However, one ghost appears in New York, that of a young woman that Delia calls "Shadow". Shadow follows her everywhere and Delia knows instinctively that she will never be free of Shadow unless she finds out why the ghost is haunting her. When word comes of Sadie's engagement and the ill health of Sadie's mother, Esther, Delia knows the time has come to return to San Francisco.

Sadie's fiancé, Jack, is on the SFPD detective squad and along with his partner, Gabriel Ryan, is investigating a series of particularly nasty murders which emulate killings investigated by Gabe's father thirty years before. Gabe is even receiving taunting letters from the killer, just as his father did. Gabe also has his own sorrow, the loss of his wife and unborn child in the fire after the Quake. How Jack, Gabe, Delia, Sadie and the killer are all bound together make up the mystery of Delia's Shadow.

Jamie Lee Moyer has done an excellent of job of tying the various elements of the story together. The four main characters are both likable and believable and the supporting characters well-rounded. There are some very scary and unsettling moments in the book, especially when the killer appears. Delia's Shadow kept me turning pages late into the night. My only quibble was that the solution to the killer's identity seemed a little too easy after stumping everyone for thirty years and the ending felt a little rushed. I am giving Delia's Shadow 3.5 stars and rounding up to 4.

Thanks to netgalley.com and MacMillan for an advance digital copy in return for an honest review.

Posted by omnireader at 3:56 PM No comments:

A vampire and a blonde walk into a bar......and John Charming knows that something is up, something that he really doesn't need to get mixed up in. John is one of a long line of Charmings who have fought and died to uphold the Pax Arcana, essentially a spell which keeps the human population unaware of the things that go bump in the night. The mission of the Knights is not to kill all monsters, but only those who behave badly enough to expose the existence of supernaturals. After decades in the order, John has become one of the monsters (at least according to the Knights) and he has been on the run. After a close encounter with an order death squad in Alaska, John has ended up tending bar in a small Virginia town. Despite being under a death sentence, he still tries to uphold the Pax Arcana and knows this vampire is up to no good. What is an ex-knight to do but team up with a motley crew of monster hunters which includes a Valkyrie, a Slavonic psychic, a cop, an exterminator and a female Episcopalian priest. The question is: who is going to kill him first, the Knights, the vampires, or someone from his own team?

Charming is a very promising new entry into a crowded urban fantasy field. Fans of Jim Butcher and Kevin Hearne will enjoy the humor and action particularly. John Charming has an innate core of goodness that makes him easy to cheer for, even though John himself doubts the health of his own soul. There is just enough twist on the standard vampire and werewolf lore to make it all interesting. I enjoyed Charming greatly and look forward to the next book. Thanks to Orbit and netgalley.com for an advance digital copy.


Posted by omnireader at 1:18 PM No comments:

The third entry in the Charles Maddox Victorian mystery series (after Murder At Mansfield Park and The Solitary House) finds Charles living in his Great-Uncle and mentor's home, also named Charles. The elder Charles was a famous and respected thief-taker but is now suffering the effects of what appears to be Altzheimers. When a caller leaves a card for the younger Charles, the uncle sees it and has a stroke, leaving him even more impaired. The name on the card is Percy Shelley, son of the famous Romantic Poet, Percy Bysshe Shelley.

The younger Shelley and his wife, Jane, ask Charles to discover who is in possession of papers centering on the famous summer spent at Lake Geneva by Shelley, Mary Shelley, Lord Byron and Claire Clairmont (Mary's stepsister). This is the summer of 1816 in which the idea for Mary Shelley's Frankenstein was born.  Shepherd has intensively researched the remaining records for that year and the two years proceeding. Filling in the gaps of those records , she has come up with an ugly brew of suicide, murder, madness, and possible infanticide among a group of monstrously overwrought and entitled young people.  There was genius among them, but they were also obsessive in their loves and more importantly, hates. As Charles tries to find out what really happened, he discovers that his uncle was involved. Indeed, his uncle has hidden all records of his involvement.

While I applaud Ms. Shepherd's research and encyclopedic knowledge of the times, I am afraid that I can't recommend A Fatal Likeness. The various plot lines are so convoluted, the names so similar I found it somewhat difficult to keep up with just exactly who was who. The novel was a slog for me throughout and the characters and story left me with a "bad taste". I had liked Charles Maddox very much in the first two novels of the series but his ability to ignore unpleasant facts about himself surprised and disappointed me.  The use of an "omniscient narrator" is at best annoying, and at worst, somewhat condescending.

RATING- 2 stars
Posted by omnireader at 4:45 PM No comments: