Let me say at the beginning- I am decidedly not a fan of Sci-Fi in general. Until embarking on the Vorkosigan Saga I had read very little sci-fi, with the exception of some Ray Bradbury. There is nothing I dislike more than techno-jargon and reading endless descriptions of weaponry. However, I had for years heard about The Vorkosigan Saga and seen many rave reviews. I had a few extra audible credits so I decided to give SHARDS OF HONOR (Hugo winner) a try. I was immediately hooked by the meeting of Cordelia Naismith and Aral Vorkosigan. Cordelia is a member of the Betan Survey Corps, a Captain, and Aral Vorkosigan a Commander in the Barrayaran Army. The two planets, Beta Colony and Barrayar could not possibly be more different. Beta Colony is a socially and technologically advanced, egalitarian society. Barrayar was isolated for hundreds of years and is a warrior, feudal society, considered barbarians by the more advanced planetary societies of the galaxy. Cordelia has stumbled onto the preparations for a Barrayaran invasion of the planet  Escobar. Aral takes her prisoner but he has his own problems. A cadre of his men has staged a mutiny and has left him for dead. The two have to travel together to his unit so that he can take back command. During the journey the two bond and Cordelia finds that far from being the "Butcher of Komarr", Aral is a man of honor and conscience. He asks her to marry him but events intrude. She returns to Beta Colony but finds that it really isn't home to her any more. Home is with Aral and she leaves everything on Beta Colony to return to Barrayar. The two are married, the Barrayaran Emperor dies and Aral becomes regent for the child emperor, Gregor. Even though SHARDS OF HONOR won the Hugo Award, many consider it to be the weakest of the saga. I disagree in that I think it sets up the themes that recur though out all succeeding books.


The second book is BARRAYAR and covers the early, tumultuous years of the Regency. Barrayar is a political snake-pit; plots, betrayals, counter-plots and uprisings. Cordelia, now Lady Vorkosigan, finds the move very difficult. She thinks that "Barrayar eats it's own young". But she and Aral persevere through many challenges- the greatest being poisoned during her pregnancy. Their son, Miles, is born deformed and dwarfish-this in a society that in earlier years killed all "muties" or mutants at birth. He faces years of surgeries and medical treatment throughout his childhood, but is gifted with intellect, charm, and endless energy. Miles is the linchpin of the remaining books of the saga and his journey through young adulthood into maturity is quite a ride.


The major novels in READING not publication order are as follows:


There are several novella length stories available that serve to enrich and expand the main novels. The first four novels are published in omnibus editions, CORDELIA'S HONOR and YOUNG MILES, as well as single title editions. Or you could do what I did, listen to the wonderful readings by Grover Gardner available through audible and on ListenNJ as free downloads.


The Vorkosigan Saga can be read on so many levels, as pure adventure, as science fiction, as an examination of such themes as honor and conscience and genetic ethics. My reading is that of a very long coming-of-age story. I admit that I almost gave up on WARRIOR'S APPRENTICE. Miles was just too rash, arrogant and hyper-active for me. But I persevered and loved watching him mature. The characters are rich and varied and I became very emotionally invested in almost all of them. The science is definitely there, but embedded in such a way as not to become the whole point of the stories.


Highly Recommended for Sci-Fi Fans and those who aren't!

A Change of Pace in the Deborah Knott Series

I am a long time fan of Margaret Maron's Deborah Knott series and was delighted to meet her at BEA this year and get a signed copy of her most recent book.  As a native North Carolinian who has lived "away" for a long time, these books are almost as good as a visit home!


Three Day Town is number 17 in the Deborah Knott series, winner of the Edgar, Macavity, Anthony and Agatha Awards. Deborah is a judge in fictional Colleton County, NC and surrounded by a large and colorful family headed by Kezzie Knott, former bootlegger and local political party power. Over the course of the series we have watched Deborah grow in her judgeship, stumble through several failed relationships and finally settle down happily with Dwight Bryant, childhood friend of her brothers and local policeman. Dwight had been waiting for her to take a look at him as someone other than a "buddy" for years. When that finally happened it was a happy event indeed even though as in life, nothing is perfect. When Dwight's ex-wife was killed Deborah became a step-mother to his son, Cal. It has been an adjustment but all seems to being going well.


This novel is somewhat different as the action takes place on New York's Upper West Side. Dwight and Deborah are finally taking a long-delayed honeymoon in New York, staying in an apartment loaned to them by Deborah's sister-in-law. They only have one errand to accomplish, the delivery of a package to Lt. Sigrid Harald from her NC grandmother. Lt. Harald had her own series before Margaret Maron began the Deborah Knott series. When Sigrid comes to collect the package the apartment has been broken into, the package is gone and a doorman is dead. By the time the mystery unfolds there are more disappearances, death and Deborah gets herself into a whole lot of trouble, as usual.


I did miss the North Carolina setting and Deborah's extended, somewhat eccentric family. However, the mystery was full of twists and turns and was tied up very satisfactorily. I enjoyed having Dwight on hand for so much of the action. Until reading this book, I had never read the Sigrid Harald series but as they are available again in ebook form, I am reading them now. Sigrid is a very different character but in the series we get to see her grow through an eventful year of her life. I would recommend starting with BOOTLEGGER'S DAUGHTER, first of the Deborah Knott series, to meet all the engaging characters mentioned in this book and watch the evolution of Dwight and Deborah's relationship.

RATING- 4 stars
Posted by omnireader at 6:56 PM No comments:

Wherein much is Revealed about our Colonial Pepperpot and the Intrepid Mr. Books 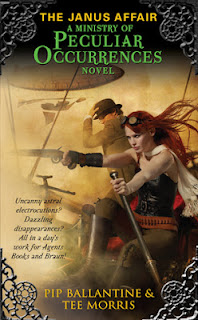 
The second novel in the Ministry of Peculiar Occurrences series (after last year's Airship Award winner, PHOENIX RISING) does not disappoint. Our intrepid Archivists, Eliza D. Braun and Wellington Thornhill Books are returning to London from Edinburgh on the train when a young woman disappears in a flash of lightning and an overwhelming electrical odor before their eyes. Eliza even knows the woman, a colleague in the women's suffrage movement. Even though Eliza is on probation of a sort after the events of PHOENIX RISING, she can't let it go. Neither can Wellington when he discovers identical cases that have been shoved into unsolved cases at the Ministry.


The leading light of the New Zealand suffrage movement, Kate Sheppard, is visiting England in order to rally the troops and asks Eliza to aid in her protection. Along with Kate is her son, Douglas, world explorer and Eliza's first love. It's clear that Douglas would like to restart the relationship but Eliza is not at all sure. Wellington is quite sure that he doesn't want that to happen however! The disappearances continue, the movement is falling apart and it is becoming clear that something is rotten at the very heart of the suffragists. The sinister Maestro, assassin Sophia del Morte, part mechanical housemaid Alice and the Ministry Seven (a band of street urchins much like the Baker Street Irregulars) from PHOENIX RISING all play a large part in the story. Horrifying events abound; non-stop action and a slowly simmering romance make THE JANUS AFFAIR a book you can't put down. Plus great gadgetry and airships of course.


I particularly liked the homage to a real historical figure, Katherine Sheppard, who was the leader of the New Zealand suffrage movement. New Zealand was the first nation to grant the vote to women in 1894 and Katherine Sheppard was largely responsible. The fictional Kate Sheppard does not resemble her physically but embodies her spirit and dedication.


Much is revealed about Eliza's life in New Zealand and just why Welly has been hiding his many talents in the depths of the archives. The novel ends with Eliza and Welly off on assignment in the former American Colonies. One wonders how oh-so-proper Welly will cope with the Americans and whether the Maestro and Sophia will follow.

Two Thumbs Up for Cliff Walk!

It is hard to believe that Bruce DeSilva has topped last year's Edgar Best First Novel and Macavity winner, Rogue Island, but Cliff Walk surpasses it. Set on the mean streets of Providence RI, Liam Mulligan is back writing stories at the dying Providence Dispatch. Staff has been cut back so far that Liam is reduced to covering the social beat and writing obits along with whatever investigative reporting he can work in. Two seemingly unrelated events set him off on a new investigation; the discovery of a child's severed arm in a pig sty and the presence of Sal Maniella at a charity ball in tony Newport. Sal is Rhode Island's most prominent pornographer and his conversation with the governor piques Liam's interest. As Liam is driving back to Providence the next day a radio report of a body on the rocks at the foot of Cliff Walk sends him back. The body appears to be Sal Maniella but no one is sure because of the damage. Sal's wife and daughter are missing in action and not available to identify the body for several days.

Prostitution is legal in RI due to a quirk in the law that makes street walking illegal, but does not outlaw brothels. Sal's daughter, Vanessa, has recently branched out in to the brothel business. Liam's long-time friend, Fiona McNerney AKA Attila the Nun, has been working for 10 years to outlaw prostitution but is getting nowhere. She has recently become the state's Attorney General, much to the displeasure of the Catholic Church. Fiona and Liam think there just might be some graft and chicanery going on with Maniella and the elected officials. As  children are snatched and bodies begin piling up, Liam is confronted by a world of corruption even worse than he suspected.

Cliff Walk is populated by a host of colorful characters, some of whom are returning from Rogue Island. From Attilla the Nun to Mason, "Thanks Dad", the Dispatch owner's son, they are unforgettable. Liam himself stands at a crossroads. Should he hang on at the Dispatch or leave the sinking ship? DeSilva is poetic in his descriptions of the glory days of the newsroom and the sad shadow it has become in the age of TV and internet news. Cliff Walk is a very dark and disturbing story, leavened by Liam's sometimes equally dark humor. By the end of the novel, Liam finds out that some of the people he counted as friends are not at all what he thought.

I highly recommend Cliff Walk, both as a crime novel and a novel that considers the meaning of faith and friendship.