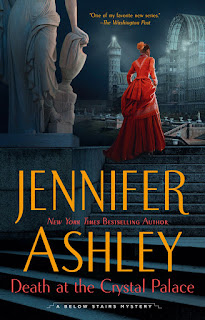 DEATH AT THE CRYSTAL PALACE
A Below Stairs Mystery
Jennifer Ashley
Berkley Books
July 6, 2021
The fifth of the Kat Holloway Mysteries takes the intrepid cook into the highest levels of society and government affairs. A child of the London streets, born within the sound of Bow Bells, Kat has raised herself at a very young age to the highest levels, working in aristocratic Victorian households. Her success is thanks to her hard work and skill at cooking and a mother who worked day and night cleaning. Kat was apprenticed and learned how to read. Life has not always been rosy, however. At a young age, Kat married a sailor and had a daughter. When he died at sea, Kat found out he already married, making the child illegitimate. That could have been the end of everything, but Kat asked friends to raise her.  Kat demands not one but two half-days a week so that she can be with the youngster. Her skill is such that she gets the days. So far, the daughter is a secret to her employers.
A chance encounter with the charming Daniel McAdam changes Kat's life. She met him as a deliveryman who kept coming around to see her. It soon is apparent that Daniel is not just a delivery man but a chameleon who can move from the highest to the lowest levels of society with ease. He works for a shadowy figure in the British Government, one who has something to hold over Daniel's head. Reluctantly, he has needed to involve her in his doings from time to time, and she has proved an asset. In Death at the Crystal Palace, Kat is approached by Lady Covington on an excursion to the Palace. Lady Covington thinks someone is trying to poison her. Kat has gained somewhat of a reputation for truth-finding. Meanwhile, Daniel is investigating a British nobleman who may be funding Irish terrorists. When the two investigations intersect, Kat is thrown into mortal danger.
The Kat Holloway Mysteries are extraordinarily well-written and enjoyable visits to Victorian England, full of detail of lives both "Upstairs" and "Down." The characters are vivid with all the virtues and defects of human beings in any age. I highly recommend the series and am looking forward to the next one. I fear that Kat will finally come to the notice of Daniel's employer, whom even he fears.
Thanks to NetGalley and Berkley Books for an advance digital copy. The opinions are my own.
4.5 Stars
Posted by omnireader at 9:02 AM No comments: