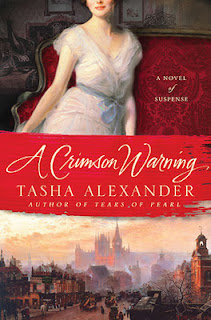 I had almost given up on this series after the two most recent books, but I am really glad that I decided to give it one last try with A CRIMSON WARNING. Lady Emily is back on her own turf in London society, and back to being her clever, feisty, reckless self. The two books set in Constantinople and in France with her harridan of a mother-in-law just didn't work for me.
Crimson paint is being splashed on the houses of some of London's wealthiest and influential citizens, followed quickly by the exposure of scandals. Even though a man so victimized by the paint has also been horribly murdered, the "ton" is much more afraid of scandal than death. The Queen asks Colin Hargreaves, Emily's husband, to investigate and put an end to the pervasive atmosphere of fear abroad in the city. Emily of course becomes fully involved and proves again that she is an equal partner with Colin. They are convinced that the crimes and scandals are the product of rage at being slighted and a wish for revenge. But could it be even more sinister and who is the perpetrator? Even Ivy, Emily's closest and most gentle friend, has a secret that must be kept.
The path that they follow has many twists and turns, with code-breaking and many a trip to the British Museum and Library. I had settled on my candidate for the crimes early on instinct alone, but was misdirected by Alexander very neatly. It takes one more innocent death to solve the crimes and to see that Hargreaves doorstep defaced as well. Many of the characters we have met before reappear in A CRIMSON WARNING, and a host of new ones, all either eccentric, shallow or dangerous. A CRIMSON WARNING is very ingenious and entertaining- Welcome Back, Lady Emily!
Rating- 4 Stars
Posted by omnireader at 5:16 PM No comments:

Back to the Iron Seas in Airships


Following the first book in Meljean Brook's Iron Seas series, Heart of Steel continues the adventures of two characters from the Iron Duke, Archimedes Fox and Yasmeen, mercenary airship captain. Archimedes Fox is an adventurer specializing in retrieval of antiquities lost in territories infected by the zombie plague. He is also the hero of "pulp" novels written by his sister, Zenobia. The mysterious Yasmeen is not only one of the few female airship captains, but is one tough cookie- the "heart of steel" of the title. She kicked Archimedes out of her airship into a zombie infested Venetian canal. Needless to say, Archimedes fell madly in love with her at that instant (even though he doesn't quite know it)! She kicked him off the ship, but kept an unknown Leonardo Da Vinci sketch that he had salvaged.

The action starts when Yasmeen goes to see Zenobia- not only to report the probable death of her brother, but to offer her a portion of the proceeds of the sale of the sketch. When she arrives, she finds Zenobia held hostage. The existence of the sketch has somehow become public and lots of people want it. Including Archimedes who needs it to repay a debt, one that will cost him his life if not repaid. Archimedes and Yasmeen join forces and the great adventures begin. Yazmeen loses her hard won fortune and her beloved airship, Lady Corsair, along with her crew but gains much more.

I can't even attempt to describe the intricate world that Meljean Brook has built in the Iron Seas series. I can only recommend that you begin with the Iron Duke and follow up with Heart of Steel. High adventure, steampunk gadgets, zombies and romance make Iron Seas a must-read. I really cringed at the cover of the book and the audio book, but managed to ignore its general cheesiness. There is plenty of lusty romance here, but I personally enjoyed the adventure more. My only quibble was that the various scrapes and dilemmas of Archimedes and Yasmeen seemed too easily resolved. One expects a book like this to have a happy ending, but it just was a little too neatly done. Otherwise, I highly recommend Heart of Steel as a fast-paced, enjoyable escapist read. The audio book is very competently performed by Faye Adele

Posted by omnireader at 8:39 PM No comments: 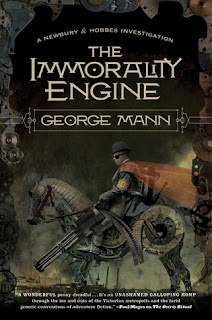 The third in George Mann's Newbury and Hobbes Investigations Steampunk series is great fun from beginning to end. Sir Maurice Newbury, Queen Victoria's agent, is continuing to sink into his opium addiction, much to the dismay of his great friend, Sir Charles Bainbridge of Scotland Yard. Still more distressed is Sir Maurice's assistant Miss Veronica Hobbes.

When the body of a suspected jewel thief turns up murdered in one of the seedier sections of London, yet robberies identical to to the corpse's earlier crimes are still happening, Sir Maurice must rise to the occasion. Bainbridge and Hobbes must literally drag him out of an opium den. To add to the mystery of the corpse, there also seems to be a threat to the life of the Queen.

The plot includes clairvoyants, clones, a wacky resurrection cult, spectacular war engines in the best Steampunk tradition, and a vision of Queen Victoria that is truly creepy. Kept alive by the machines of the the diabolical Dr. Fabian, she sits like a spider in the web of her own mad plots and deceits. Newbury and Hobbes are forced to decide whether their loyalty has been misplaced.

The Immorality Engine completes the first story arc of the series and I can hardly wait for the next installment of the Newbury and Hobbes investigations. I would, however, recommend reading The Affinity Bridge and The Osiris Ritual before diving into The Immorality Engine. While Mann does a great job of bringing us up to speed, the first two books help build the world and characters. The Newbury and Hobbes Investigations are a great blend of mystery, horror, steampunk and a little romance.

Posted by omnireader at 5:58 PM No comments: