A Spooky Old House and a Devastating Storm 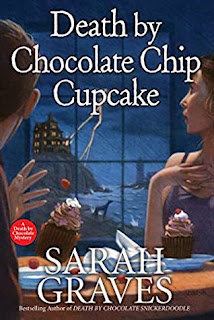 DEATH BY CHOCOLATE CHIP CUPCAKE
Death by Chocolate Series # 5
Sarah Graves
Kensington Books
March 29, 2022
I am always happy to revisit historic Eastport, Maine, where a lot happens in such a small town. When things happen (usually homicide), best friends and partners Jake Tiptree and Ellie White are always mixed up in it. We first met Jake and Ellie in Sarah Graves' first long-running series, Home Repair is Homicide. Jake is a transplant from NY who arrived in Eastport running away from an abusive ex-husband. Her young son, Sam, has drug problems and a penchant for getting into trouble, sometimes life-threatening. Jake also has a somewhat shady past as a money advisor for the NY mob. Ellie is a life-long Eastporter, down to earth with the Maine knowledge that Jake lacks. The first series is set against the background of Jake's endless rehabbing of her early 1800s house. In the second series, Jake and Ellie have opened a bakery called The Chocolate Moose.
When Death by Chocolate Chip Cupcake opens, Jake and Ellie are wondering how to keep the bakery open during the off-season for the locals. When a limo arrives carrying a somewhat faded Hollywood icon, Ingrid Merryfield, they think their prayers are answered. Ingrid claims that she was born in Eastport and has purchased Cliff House, a mansion that has been uninhabited for years. Cliff House has quite the reputation since multiple murders happened there, and the locals think it is haunted. Ingrid wants to hire The Chocolate Moose to cater a party she is throwing for a small group of friends. Jake and Ellie have plenty of questions, but the money is too good to turn down, enough to keep the bakery open through the winter. They can't find any evidence of Ingrid's Eastport birth, and why is she having a party before any renovations to Cliff House? And why does Ingrid need a very imposing bodyguard? There are plenty of spooky events at Cliff House, but neither Jake nor Ellie believe in ghosts. What worries them is the motley crew of guests Ingrid has gathered there. Some of them appear to be enemies rather than friends. A devastating storm sweeps in, stranding them all at Cliff House. Murders begin, and they have to get out somehow. The storm was so violent that no help was coming from Eastport or the Coast Guard.
All the Eastport characters have come to feel like friends over the years I have been reading both series. There are no lengths they will not go to for each other. This book is another action-packed entry for Jake, Ellie, Sam, and especially Jake's aging and ailing father. Thanks to Kensington Books and NetGalley for an advance digital copy. The opinions are my own.
Posted by omnireader at 11:23 AM No comments: 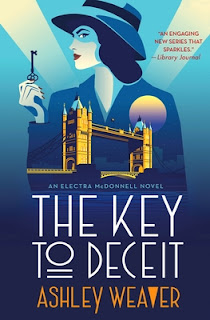 THE KEY TO DECEIT
Electra McDonnell #2
Ashley Weaver
St. Martins Minotaur
May 10, 2022
The McDonnell family lives in London’s East End and is well known for locksmithing. They also do a little safe-cracking on the side when economic circumstances require it. The only girl in the family, Electra, grew up learning locksmithing at her Uncle Mick’s knee and is an expert.
But as a woman in the WWII era,  Electra is usually laughed at by prospective customers until she proves what she can do. Uncle Mick and her cousins, Colm and Toby, have no such reservations, and Electra is a welcome part of the safe-cracking side of the business. In the previous book, His Majesty’s Government, in the form of the upright and reserved Major Ramsey, offers the McDonnell family an offer they can’t refuse; forgiveness for previous crimes in exchange for help with the War effort. Part of the deal is the cessation of all illegal activities. The McDonnells agree as they are patriots; besides, England is in the “phony war,” waiting for Germany’s inevitable attack.
Electra proved her mettle in her first case, A Peculiar Combination, so it is no surprise when Major Ramsey has a new investigation for her. A girl has turned up drowned in the Thames wearing a bracelet adorned with a unique locket. When Electra opens the locket, it has microfilm inside. The young woman was involved with espionage, but why and who would kill her? She appeared a regular country girl who was looking for a new life in London in all respects. This investigation will take Electra and Major Ramsey into perilous territory as the Blitz finally arrives. The descriptions of those first nights of the bombing are riveting.
The Key to Deceit is another enjoyable entry in the series, combining a puzzle to solve, adventure, suspense, with a light touch of romance. Will she or won’t she, and if so, with whom? A secondary, important mystery is Electra’s quest to find out more about her mother, who died in prison after giving birth to her. She supposedly killed Electra’s father but always denied it and was believed by many. Electra’s Uncle Mick was her father’s brother and took her in, raising her as one of his own. Not surprisingly, it was never discussed in his household. Readers of cozy historical mysteries should enjoy the Electra McDonnell series immensely.
Thanks to NetGalley and St. Martin's Minotaur for an advance digital copy. The opinions are my own. See also at www.mysteryandsuspensemagazine.com.
RATING- 4 Stars
Posted by omnireader at 2:12 PM No comments: 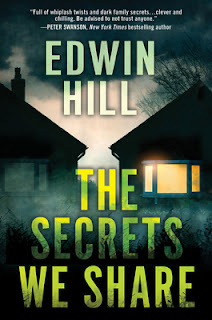 THE SECRETS WE SHARE
Edwin Hill
Kensington Books
March 29, 2022
Sisters Natalie Cavanaugh and Glenn Abbott could not be more different. Natalie is a 40-something Boston detective, and Glenn is a food blogger who is on the cusp of significant success with a book coming out in a few days. Loner Natalie passes out every night from drinking too much and seems to have no one who cares about her other than her mentee on the force, Zane Perez, and her sister. Glenn appears to have everything in control, with her husband Jake and 12-year-old daughter, Mavis. There is a lot of trouble in Glenn's paradise, however.
The secrets that the two sisters share go back to the murder of their father years earlier. Alan Cavanaugh was murdered in the woods behind their house in suburban Boston. It appears that he was murdered by their next-door neighbor, who had an affair with him. She even confessed to it before killing herself. As a result, her two children were broken up and sent into the foster system. Natalie and Glenn were never separated, but many townspeople still believed that their mother, Ruth, was actually guilty. All the disparate threads of the murder of Alan come back to haunt them.
Hester Thursby, librarian and researcher extraordinaire, and her veterinarian husband, Morgan make a brief appearance (along with their daughter, Kate, and various assorted canines). Their friend, Detective Angela White, is prominently present, who takes the investigation away from Natalie when Glenn's daughter Mavis discovers a grotesquely murdered body in an abandoned warehouse. All the clues seem to point back to that earlier murder of Alan Cavanaugh. The Secrets We Share is Hill's best work, full of head-spinning twists and turns that kept me up late. When the final solution to the puzzle was revealed, I was astonished. Hill's portrayal of Mavis, intelligent, focused, and fierce, placed in considerable danger, is also a stand-out.
I highly recommend The Secrets We Share. Thanks to NetGalley and Kensington Books for an advance digital copy. The opinions are my own.
5 Stars
Posted by omnireader at 8:27 PM No comments: