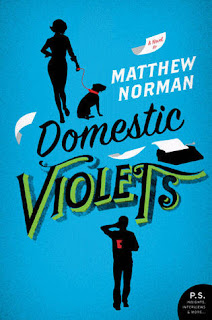 
Domestic Violets has been on my TBR list (compliments of netgalley.com) so I decided to read it this Hurricane Irene weekend. To be honest, I had read a few pages earlier but was put off by the beginning, which features an episode of erectile dysfunction. Call me a fuddy-duddy, but I tend to think erectile dysfunction belongs neither in a book I want to read, nor as ads placed in televised golf matches! Despite a slow start, I soon found myself chuckling and caught up in Tom's various dilemmas.

Tom Violets thought his life would be perfect by the age of 35, full of fame, fortune and success. Instead, he is trapped in a soul-destroying copy writing job for a company that doesn't do anything that can be quantified, which Tom refers to as the "Death Star". He has an inappropriate crush on his cute young assistant, and his marriage is on shakier ground than even he imagines. Even the family dog has an anxiety disorder. Tom has a finished novel sitting in a desk drawer, but since his father is a "real" celebrated novelist this,too, is problematic. Then his father wins a Pulitzer, another in a long line of literary prizes, it sets off a whole chain of events that Tom stumbles, and often trips, through.

Other reviewers have called Domestic Violets hilarious. I don't go that far, but I found it witty, clever and charming- and very poignant in its look at unrealized expectations and dysfunctional family dynamics. My major laughs came from Tom's snarky comments about the emptiness of American Corporate culture and the publishing industry, which gives a book contract to Snooki of Jersey Shore, and lets real writers languish. No "hook" no book!

Tom Violet is a great character, bright, funny and subversive. His moral compass may be a mite skewed, but his heart is pure. The cast is vivid and fully realized, from famous father Curtis Violet (a Norman Mailer-esque figure but with loads more charm), to Tom's equally conflicted wife, to Curtis' latest whack-job ex-wife, to Katie, Tom's assistant.

By the book's end, Tom's life has completely changed, at least in all the ways it should have. Essentially, Tom has grown up. In fact, I see Domestic Violets as a coming of age tale, with a couple of satisfactory twists at the end. Domestic Violets is one of the best reads I've had in a long time and I look forward to more of Matthew Norman's work. Highly recommended!

Rating 5 Stars
Posted by omnireader at 7:43 AM No comments:

No Sophomore Slump For Charley Davidson and Darynda Jones!


Product Description-When Charley is rudely awakened in the middle of the night by her best friend who tells her to get dressed quickly and tosses clothes out of the closet at her, she can’t help but wonder what Cookie’s up to. Leather scrunch boots with a floral miniskirt? Together? Seriously? Cookie explains that a friend of hers named Mimi disappeared five days earlier and that she just got a text from her setting up a meet at a coffee shop downtown. They show up at the coffee shop, but no Mimi. But Charley finds a message on the bathroom wall. Mimi left a clue, a woman’s name. Mimi’s husband explains that his wife had been acting strange since she found out an old friend of hers from high school had been found murdered a couple weeks prior. The same woman Mimi had named in her message.


Meanwhile, Reyes Alexander Farrow (otherwise known as the Son of Satan. Yes. Literally) has left his corporeal body and is haunting Charley. He’s left his body because he’s being tortured by demons who want to lure Charley closer. But Reyes can’t let that happen. Because if the demons get to Charley, they’ll have a portal to heaven. And if they have a portal to heaven…well, let’s just say it wouldn’t be pretty. Can Charley handle hot nights with Reyes and even hotter days tracking down a missing woman? Will Cookie ever get a true fashion sense? And is there enough coffee and chocolate in the world to fuel them as they do?

Once again I have to thank the folks at St. Martins Press for an advance look at Second Grave on the Left. Charley hits the ground running, juggling multiple cases in this outing: Cookie's missing friend, Reyes' missing body, demons, a 20 year old case of a missing girl, her father's odd behavior, and last but not least, the dead guy in Cookie's trunk. The action is fast and furious, and the humor never falters. Charley has abilities she never even imagined, and she needs all of them to get through the most chaotic week of her life. Never does she lose her ability for the quick verbal comeback though!

Most of the characters from First Grave on the Right are back, some good and some definitely bad. Reyes is alluring and enigmatic as always. I often don't get his motivations, but neither does Charley. This lack of understanding leads to a cliffhanger at the end of Second Grave but I trust we won't have to wait too long for Third Grave Dead Ahead. Darynda Jones deftly avoids "sophomore slump" in this second entry. Highly recommended!


Rating- 4 Scythes
Posted by omnireader at 5:10 PM No comments: