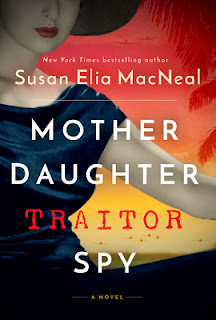 MOTHER DAUGHTER TRAITOR SPY
Susan Elia MacNeal
Bantam Books
September 20, 2022
It's 1940 in New York, and everything seems to be coming up roses for Veronica Grace and her widowed mother, Violet. Ever since childhood, Veronica has wanted to be a journalist, modeling herself on Martha Gellhorn. She is graduating with honors from Hunter College and has a great job lined up. Her father, a Naval Commander, has been dead for six years, so her uncle Walter has come from Southern California to celebrate. Little do they know that everything is going to change. Veronica has a secret. She has been having an affair with an older reporter who was supposed to be mentoring her, and his wife has found out about it. Unluckily, the wife is part of a mighty publishing family who has reported it to Hunter and Veronica's prospective employer. Veronica's dreams are smashed, and even worse, she is just one of a string of girls who were fooled by him.
Uncle Walter has a plan for them, though. He has a small cottage in California to offer them so they can make a new start. Despite having lived their whole lives in Brooklyn, Violet and Veronica see no alternative. A scandal like this can't be hidden or glossed over, not in 1940. The little family heads off to sunny LA with heavy hearts and no idea how to start over. Veronica finds it challenging to find a job, especially without any experience or education she can mention. Violet is a typical housewife and mother of the time with no work experience. She is, however, a talented seamstress and specializes in custom embroidery on clothing. One day mother and daughter engaged in a casual conversation with a woman who told Veronica of a possible job with the woman's brother-in-law doing stenographic and general office work. Violet's beautiful embroidery is also noticed by rich, well-connected women, primarily women connected to right-wing causes. Veronica takes the job but soon discovers that her seemingly "nice," jovial employers are part of the America First Committee and are distributing poisonous propaganda for the Nazi Regime. She is sickened and horrified, and when she tells Violet, the two women go first to the police, then to the FBI. The police can do nothing and seem, if anything, sympathetic. And J. Edgar Hoover was only interested in chasing Communists. A call to a Naval colleague of Veronica's father brings results, however. He puts them in touch with two active agents trying to stop the Nazi influx. Since Violet and Veronica are of German heritage and look like perfect blonde examples of Aryan womanhood, they will have no problem infiltrating. The women agree since they both are patriots who hate the rise of the Nazis. It becomes clear to them that they will be in great danger. The Nazi sympathizers are planning something "big" if Roosevelt is re-elected.
The plot of Mother Daughter Traitor Spy would be quite fantastical if one didn't know how dangerous Nazi sympathizers were all over America, especially on the coasts. Xenophobia ran rampant when it became clear that America was being inexorably drawn into another World War. However, the characters of the agents, Violet and Veronica, as well as the Nazis, are based on real people. The agents went on after the War to successful careers and prominence. The women who placed themselves in such peril have been largely forgotten, which seems to be how such things go. Veronica's real name was Sylvia Comfort. One can't read Mother Daughter Traitor Spy without seeing the parallels to today's political climate. This is a nail-biting thriller with characters to remember.
Thanks to Bantam Books and Netgalley.com for an advance digital copy. The opinions are my
own.
Posted by omnireader at 7:44 AM No comments:

Not the Usual Longmire 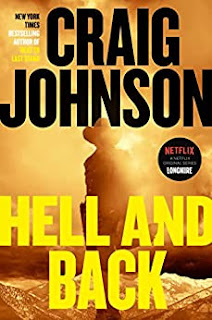 HELL AND BACK
Walt Longmire #18
Craig Johnson
Viking
September 6, 2022
It has been a while since I read the Walt Longmire series, but when I had a chance to read Hell and Back, I was pleasantly reminded just a few pages in. Johnson's prose is beautiful, and the character of Walt is one that you just want to spend some time with. This is not quite the Walt I remember since Johnson takes him into mystical territory. He has strayed there in previous novels, but not to this extent.
Hell and Back opens with Walt waking up snow-covered in a street. He is also covered in blood and doesn't know his name or where he is. He sets off for the nearest lights in a diner just beginning to close. Despite an advancing blizzard, the pretty waitress (who looks somewhat familiar) still makes a meal for him. She also helps him with his name on the hatband inside his cowboy hat. He is in Fort Pratt, Montana. Fort Pratt was the home of an Indian Training School that burned to the ground over a hundred years ago, killing thirty boys. The waitress tells him there haven't been any good stories in Fort Pratt since.
The fact that Walt is missing is not lost on Vic Moretti, his under-sheriff, and his longtime friend, Henry Standing Bear. Both, along with Walt's giant indeterminately bred hound "Dog,"  have set off to find him in the teeth of the blizzard, and the story switches between them and Walt. Walt's wanderings feature meetings with all sorts of characters in the snowy landscape, both natural and possibly imagined. The gates of the training school are still standing. When Walt crosses onto the grounds, he thinks he is back in time to when the school was still operating, to the very day it burned at 8:17pm.
This departure may throw longtime readers of the series, but Johnson gives us the twists in plotting and robust character building that we expect. I am decidedly not a fan of Westerns, probably because I watched too many bad ones on TV in my childhood. Johnson has taken a risk with Hell and Back but succeeds in all ways.
Thanks to NetGalley and Viking for an advance digital copy. The opinions are my own.
RATING- 4.5 Stars
Posted by omnireader at 11:56 AM No comments: