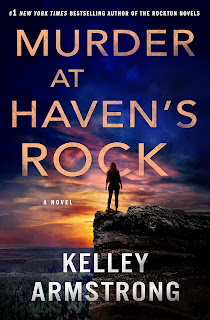 Murder at Haven's Rock is a spin-off from the earlier Rockton series after seven books. Set in the Canadian Yukon, Rockton is one of the most unique crime series I have read, and I was sad to see it go, even though that storyline had run its course. Rockton was founded as a refuge for people on the run from abusive relationships and problems not of their own making. People with unpopular political views also made up the shifting population. Over the years, Rockton devolved into a money-making enterprise, allowing some unsavory and murderous characters to take refuge there. Sheriff Eric Dalton, who was born there, and his now-wife, Casey Duncan, are tasked with riding herd on the population. Detective. Casey was one of the latest residents running from her problems. Throughout the series, their relationship matures. Casey, in particular, grew more comfortable in her own skin.

When Rockton met its end, the two had enough resources (along with others) to build a new Rockton called Haven's Rock. The plan was to stay away during the settlement building, which is nearly finished. Eric and Casy are called back because the project's architect has vanished into the forest. As one of the crew says, "shit happens up here." Does it ever!! There is a missing woman, a dead woman, an attacked worker, and a gold miner hiding in the forest. There is also a woman living in a highly camouflaged cottage who claims to be a nature photographer. Haven's Rock is not as secluded or safe as hoped.

Some of Rockton's former residents will be returning but are only mentioned here until the end. April, Casey's physician sister, has to come back when the bodies multiply. The new characters are certainly "colorful" and may have nefarious plans. The bad apples will go, but some others whose motives are not clear ask to remain. I predict another stellar series from Kelley Armstrong that will keep me guessing.

Thanks to Minotaur Books and NetGalley for an advance digital copy. The opinions are my own.

Posted by omnireader at 1:26 PM