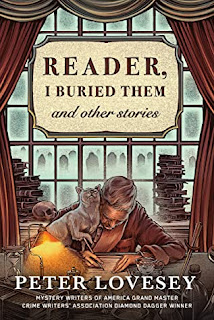 READER, I BURIED THEM and other stories
Peter Lovesey
SoHo Crime
February 1, 2022
My first question was, "Who could resist that title?" and with Peter Lovesey as the author, who would want to? Peter Lovesey has had a long and distinguished career as a crime novelist, telling stories in the classic puzzle vein. I am a great fan of his contemporary series, set in Bath and featuring the overweight, irascible Peter Diamond. I was unaware of his Victorian series and many short stories.
The stories in Reader, I Buried Them include characters both high and low-born, rich and poor, good and evil, and those caught in situations, not of their making. I found And The Band Played On heart-wrenching and The Homicidal Hat hilarious. Each of the stories is a small gem, many with a touch of macabre humor. Anyone who knows Peter Lovesey's work will be delighted by this collection, and those who aren't familiar will have a pleasant introduction.
Thanks to SoHo Crime, NetGalley, and Mystery and Suspense Magazine for an advance digital copy.
RATING- 4 Stars
Posted by omnireader at 10:54 AM